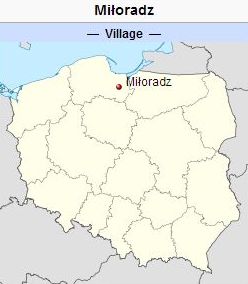 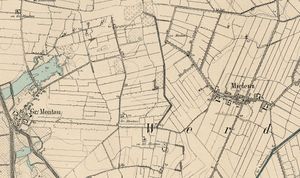 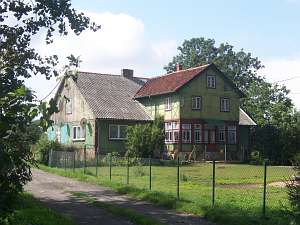 Mielenz existed before the Teutonic Knights period and was mentioned in 1282 as Miloradesdorf. In 1321, the village was granted the Chełmno charter (Kulm Law, a legal constitution for a municipal form of government) by the Werner von Orseln, Grand Master of the Teutonic Knights. Until 1772 the village was part of the Kingdom of Poland. The First Partition of Poland resulted in the creation of a new province in 1773, called West Prussia. Mielenz was situated in the district (Kreis) of Marienburg until the establishment of the Free City of Danzig in 1920. The village came under the control of Nazi Germany during World War II until February 1945, when it was occupied by Soviet forces and returned to Poland. In 2012 Mielenz (now Miłoradz) was a village in the administrative district of Gmina Miłoradz in Malbork County, Pomeranian Voivodeship.

Mennonites most likely settled in Mielenz in the 16th century. The Mennonite population in this village was never large: in 1776 there were seven families composed of 36 individuals; their names included Claasen, Dick, Isaac, Mattis, and Wiebe. In 1820, the village had 298 residents, including 21 Mennonites and in the 1860s, 43 houses, and 495 residents, including 26 Mennonites. In 1935 there were eight Mennonite families with 16 individuals, members of the Heubuden Mennonite Church.