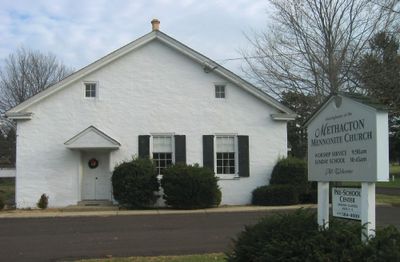 In 1739 land for burial purposes was deeded to the Dutch Anabaptist Society for 5 shillings and thus began the written record of the Methacton Mennonite Church, located near Norristown, Pennsylvania, USA. The first meetinghouse was built prior to 1771 although the exact date is unknown. Tradition says that Revolutionary War soldiers died in the church building when it served as a hospital after the Battle of Germantown, and were buried, not in the church’s burial grounds, but just outside the western wall, under a huge oak tree still standing there.

As Mennonite families moved further north towards Souderton/Franconia in the following years, Methacton Church began to be on the fringes of the larger Mennonite community rather than centrally located.

The church has always needed to draw people from the local community, from the Worcester/Collegeville area, since there were no “ethnic Mennonites” living in the area. After being down to one member in 1943, a large Summer Bible School program was begun in the 1940s and 1950s with the help of several families from the Plains Congregation. This began a new era in the church’s existence. Through this vigorous Summer Bible School outreach in the 1950s and through a preschool program (begun in 1958), community people were drawn into the church and preschool ministry.

Worchester Mennonite Church (MC), known also in the past as Methacton Mennonite Church (Mennonite Church) is located in Worcester Township near Fairview, Montgomery County, Pennsylvania, and is a member of the Franconia Mennonite Conference. The date of organization is uncertain. According to Joseph Heebner, a historian of Worcester, the church was started by the Henry Rittenhouse family (grandson of William Rittenhouse) and it is presumed that the first meetinghouse was built a few years after eight trustees in 1739 acquired a burial ground for a union cemetery. Five of these trustees were Mennon­ites: Henry Rittenhouse, Christopher Zimmerman, Conrad Stem, Peter Keyser, and Peter Custard. It is known that the meetinghouse was there by 1771. In 1873 the third and present meetinghouse was erect­ed.

Methacton Mennonite Church has never been a large congregation. There were about 50 members in 1890. Sunday school with an attendance of 125 was started in 1898 but by 1920 it was discontinued and the congregation dwindled. Extreme reluctance to adopt progressive methods and the long continuance of the "circuit system" of ministerial leadership are some reasons given for the decline in interest. In 1943 there was one communi­cant member and the Franconia Mission Board made Worcester a mission station. An annex was added to the church building in 1948 to provide space for Sunday school and for summer Bible school, in which the enrollment had reached several hundred. On 22 January 1950, Paul R. Clemens was or­dained minister and Worcester again became an or­ganized congregation, with 80 members in 1958.