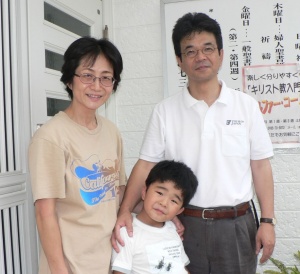 In the summer of 1999 a prayer meeting began in Surrey, at the home of Toshiko Sasaki. With Pastor Takahiko "Yoshi" Yoshiyuki joining the small group, in September 1999 they decided to move from a home prayer meeting to becoming a church in a rented space. Mennonite Japanese Christian Fellowship (MJCF) formally began in May 2000, with 11 founding members. They included some who had been attending another Japanese congregation – Surrey Mennonite Church. MJCF also became a member of the Conference of Mennonites in British Columbia. After a few moves, in February 2002 they settled at St. Helen’s Anglican Church, also located in Surrey. In June 2003, Sung-Rok Cho began as an associate pastor. In May 2003, a daughter church or church plant called North Shore Japanese Church in West Vancouver was founded, also pastored by Yoshiyuka. In March 2008, Takahiko Yoshiyuki moved to Japan.

In September Gerald Neufeld was welcomed as the new pastor. On 26 September 2008 a twice monthly outreach program called CrossRock was begun for young people. Most of those who attended were Japanese exchange students. Shoko Kawakami and Nozomu Goto gave leadership to this event which attracted up to 70 people. They enjoyed board games, music, and traditional Japanese food. The pastor gave a five minute message at each event. Only a few people planned these events, so they took a lot of energy. With Shoko and Nozomu moving, the church decided to make some changes. The final CrossRock meeting was a Christmas candle-light service and meal held 25 December 2009, with about 100 people attending.

MJCF has enjoyed fellowship with various Korean groups and, after one such contact, MJCF welcomed a Korean associate pastor. In November 2010 they were blessed through a joint worship and pot-luck with the Sherbrooke Korean Mennonite congregation.

MJCF has a mission to reach out to the Japanese speaking population, and all their events are held in Japanese. They have come to realize that a bilingual element needed to be built into church programs as increasingly the children and spouses of Japanese-Canadians speak only English. Now messages are bilingual, with the words translated either into English or Japanese. MJCF enjoys singing in a contemporary style, with a few traditional hymns mixed in. Usually songs are projected and accompanied by guitar and piano.

MJCF has the practice of including everyone in the general decision making. Proposals are often discussed between the pastor, the congregational chair, and a few others in executive positions, but any decisions are made together at monthly congregational meetings.

The congregation celebrated its 10th anniversary on 29 August 2010 with around 120 people in attendance. The pastor presently is Gerald Neufeld.