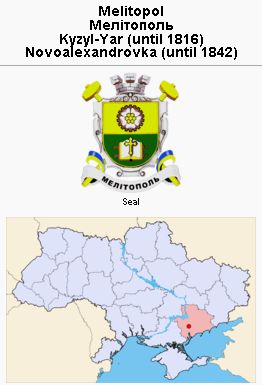 Melitopol is a city (1957 pop. 75,000; 2005 pop. 151,000) in what was South Russia on the Molotschna river in what was the province of Taurida. In 2006 it was a city in Zaporizhia Oblast, Ukraine. As a trade center, Melitopol was important to the villages in the volosts of Halbstadt, Prischib, and Eichenfeld. In 1914 among other German Protestant groups there was a small Mennonite congregation there with a church of its own. Some of the members lost their lives in the Makhno reign of terror during the spring of 1919.

The Mennonite church in Melitopol is of particular historical interest, since it was the scene of the last meeting of the general conference (Bundeskonferenz) of the Russian Mennonites. The church had been closed for some time because the congregation had not registered promptly in the winter of 1923-24, and was unable to raise the necessary funds. It was opened on 9 August 1925 when outside funds were donated, and was used every Sunday.

At the Ukrainian Mennonite general conference of 5-9 October 1926 there were present 83 delegates and 14 visitors, representing 22,380 members. The meeting was watched over by two government officials (Kotelnikov and Schön). The discussions were determined by the pressures and difficulties of the time; ways and means were sought to alleviate them in the spirit of unity and love. Their desire was, as P. Penner (Lichtfelde) said in the conference address, to promote the kingdom of God, to the exclusion of any selfish interests.

This striving found expression in the reports given by representatives of the several districts on work done in the 20 months following the general conference held in Moscow in January 1925. Efforts had been made to elevate the inner life of the church and to resist the destructive spirit of the age. Everywhere church services were well attended.

A resolution passed on these reports stated as a confession of faith, "that everywhere in the churches even in the most difficult circumstances an effort is being made to grow as a church of Christ on protective Biblical principles in the generally upset circumstances of life. One of the first requirements toward this end must be mutual loving understanding and the peaceable, fraternal cooperation between the various branches; the reports show us that in all the congregations there is an awakening to the recognition of this need and the efforts in this direction are being made. This is grace and true mercy from God, which watches over the churches, and only in the strength of this grace can we approach our goal. . . . In surveying our widely scattered Mennonite brotherhood we are filled with the conviction that there is resident in our people a capital of religious strength, inner warmth and tenderness, and that our peculiar Mennonite confession presents a rich mine of healthy folkstrength and our Biblical church organization offers a fruitful field for developing the same."

The addresses and talks on the seriousness of the situation were in harmony with the above. The difficult tasks of church work, particularly pastoral care, were in the foreground. The proposals made here had as their object the elevation of the religious and moral life of the brotherhood. Consideration was given to the long recognized need for a Bible school, for expanded evangelization, for unity among the children of God, and expansion of work for the youth. The missionary spirit, which had to a large extent grown lax, was to be revived.

Regarding youth work the government representative reminded the conference that the instruction of children under eighteen was prohibited. The conference planned to work toward procuring government permission to give this instruction. But this was not achieved, nor was the Bible school set up. Already during the conference sessions there were indications of suppression. H. Reimer, the pastor of Rückenau, was sentenced to a month of hard labor for issuing birth certificates, and his congregation was dissolved. At the conference the government representative also raised objections to letting Unser Blatt circulate outside the Ukraine and recommended that they obtain government permission for this, as they had done for their foreign subscribers.

The discussions of the delegates revealed that the congregations had been losing capable leaders by the emigration of many preachers. In 1926 there were only 46,829 Mennonites, including children, in the Ukraine; of these, 9,000 baptized members met in 23 churches in the Molotschna.