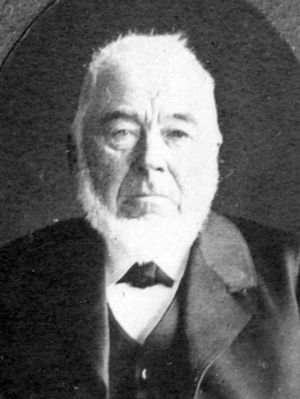 John Kinzel McNally, farmer, preacher and leader of the New Mennonite Church of Canada West and the Mennonite Brethren in Christ (MBiC) was born in Berks County, Pennsylvania, USA on 7 March 1822. He was a son of William Henry McNally (21 April 1794-11 July 1864) and Sarah Kinzel (19 Aug 1800-4 Apr 1885). McNally migrated to Ontario in 1824 with his family. One younger brother is known. John McNally farmed in North Dumfries Township in Waterloo County just south of Blair, now a part of Cambridge, all his adult life.

Although the father of John McNally was listed as a Lutheran in the census of 1861, by then John had already been ordained for the New Mennonite Church by Daniel Hoch (13 July 1852). The circumstances of his conversion are not known. McNally served the Blair New Mennonites from 1852 to at least 1875, and as a preacher for various Waterloo County meeting places. His main colleagues in Waterloo were Abraham Z. Detweiler at Doon, Samuel Schlichter at New Dundee, John Rickert from Mannheim, Peter Geiger in Hay Township, Huron County and for a few years, John McAuley, originally from Markham, at Blair itself. Samuel B. Bowman (Bauman) and Deacons Isaac Bergy, Amos Clemens and Jacob Huber were also important co-workers in Waterloo.

John McNally briefly withdrew from the New Mennonites in 1855, when open communion was discouraged by Daniel Hoch and several preachers resigned. McNally returned about 1857 when a compromise seems to have been effected. He was listed as “bishop” in 1858 in the minutes of the fourth annual conference of the “New Mennonite Church in Canada West and Ohio,” a designation that did not continue long, but shows the prominence of McNally in the Waterloo New Mennonite community. On 16 September 1859, in the home of John McNally, the “Neue Mennoniten Missions Gesellschaft” was formed, with Abraham Z. Detweiler as president, and McNally as the “Verwalter” (steward) for many years. He helped draw up the New Mennonite preaching plan some years, which took him to an appointment called “Hoffman's”, and to Blenheim, in Oxford County, in addition to Blair and “Dundee” (New Dundee). By March 1875, McNally was a supporter of the merger of the New Mennonite Church and the Reforming Mennonite Society when they met at Bloomingdale, at Snyder's Church. The United Mennonites, as they were called, committed themselves to practice open communion and revivalist doctrine, and the 1632 Mennonite Dortrecht Confession as the basis of union. Daniel Hoch and A. Z. Detweiler did not participate.

After that period McNally served numerous appointments, mostly one year at a time, usually in Waterloo County under the United Mennonites/ Evangelical United Mennonites/ Mennonite Brethren in Christ. With a large family still living on the farm, McNally was reluctant to itinerate and was usually appointed as helper. The only times he was not the leading pastor or a helper in a Waterloo County MBiC circuit or mission (mainly in connection with Blair, New Dundee, Berlin or Breslau) were two years as a conference evangelist (1884-85 and 1886-1887) and one year on the Simcoe County circuit of Nottawasaga (1883-1884).

Continuing his interest in missions, McNally was elected the first president of the Foreign and Heathen Missionary Society of the Evangelical United Mennonite Canada Conference in 1881 (a fund-raising group). He continued as a prominent leader, even into his senior or retirement years. He was an important bridge for the New Mennonites to accept merger with the newer, holiness-leaning, “Reforming Mennonites.”

One often repeated story about John McNally recalled when he was the pastor at the Berlin United Mennonite Church (Bethany) and baptized a group of candidates on 13 February 1878 in Schneider Creek after New Years revival meetings. The site was near Victoria Park now in the heart of the city of Kitchener. Although the members had to chop a hole in the ice to make space for the baptism by immersion, one of the people baptized, Jesse Conner, later recalled that the cold water did not harm them since all of those baptized lived to be over 80.