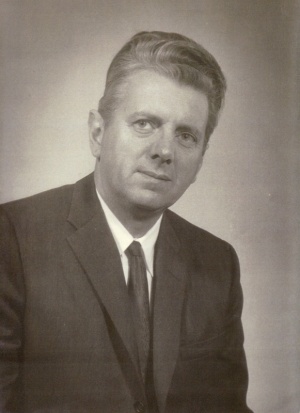 Following his graduation from grade 8, McDowell worked on the family farm as the 1930s were a difficult economic time for the family. In the winter months he was able to attend the Ontario Mennonite Bible School for a number of terms between 1936 and 1940, though he did not graduate. There he discovered his interest in theology, however, and through the assistance of Oscar Burkholder began to attend high school at Niagara Christian College in September 1939. While still attending high school he was ordained on 29 December 1940 by Oliver Snider to assist in the Wideman congregation.

He completed his high school work in 1942, and in the fall of 1943 attended Eastern Mennonite School for one year. However the war made travel across the border for draft-age young men difficult, so he did not return. After moving to Toronto in 1945, he finished grade 13 at East York Collegiate, and then enrolled part time at Toronto Bible College. He later studied at the University of Toronto, where he received his B.A. Later he continued his studies at Emmanuel College in Toronto, receiving a B.D. degree in 1956, and a M.Th. degree in 1966. His graduate thesis was entitled, "Factors common to Anabaptism and Methodism."

In 1945 Emerson McDowell was called to the Toronto Mennonite Mission (later Danforth Mennonite Church) after Harold Groh left to serve the new Rockway Mennonite School. Emerson and Elsie McDowell found their years in Toronto (1945-1964) to be among the most satisfying of their lives. During these years (26 May 1954) Emerson was ordained as a bishop in the Mennonite Church. He later pastored the Hagerman Mennonite Church (Markham, Ontario) from 1965-1975 and the Steeles Avenue Mennonite Church (1968-1975).

McDowell was both innovative and ecumenical in his work. He helped to develop camping programs for city youth and children at Fraser Lake Camp near Bancroft in 1955 and the Glenbrook Day Camp in Stouffville in 1968. The McDowell home was also open to university students and working people for fellowship and discussion.

The larger Mennonite community also utilized McDowell’s administrative gifts. He served on the board of Goshen Biblical Seminary, and on the Overseas Committee of the Mennonite Board of Missions. In Ontario he served on a variety of Mennonite Conference of Ontario committees, including a term as moderator from 1970-1975. He served as the first chairman of the Inter-Mennonite Executive Council in Ontario that years later led to the formation of the Mennonite Conference of Eastern Canada, the first "inter-Mennonite" conference.

Reflected in the title of his Master’s thesis, Emerson McDowell did not see the Mennonite community as an island. He recognized the influence of other denominations on Mennonites through exposure to ecumenical contexts. He believed the Mennonite church would increase its effectiveness through greater unity. It was no accident that the second meeting of the Inter-Mennonite Conference in January 1975, chaired by McDowell, featured presentations by a Baptist academic who studied Anabaptism. In an interview six months before his death, McDowell said one vision he had for the church was to "work at breaking down barriers so that people now outside our church can experience faith and fellowship and right relationships with God and people."