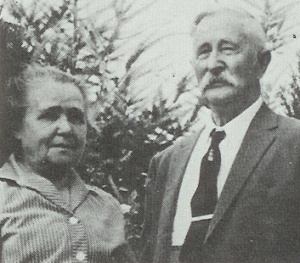 Cornelius C. Matthies: minister and teacher; born 19 November 1878 in Schardau, Molotschna Mennonite Settlement, South Russia, the son of Cornelius Matthies and Elisabeth (Nickel) Matthies. He married Susanna Schmidt (1879-1921) in 1902. In 1921 his wife died, leaving him with three sons and six daughters. Cornelius married widow Amalia (Esau) Isaak (9 May 1886, Steinbach, Russia – 24 April 1964, Chilliwack, British Columbia, Canada) in 1922. She had two children from her first marriage. Cornelius died 24 November 1968 in Richmond, British Columbia (BC) and was buried in Greendale, BC.

Cornelius became a teacher and taught in schools throughout Ukraine from 1902 until 1911. He then moved to Pleschanowo, Samara. During World War I he served in the Medical Corps on the Turkish Front in the Caucasus, returning to teach in the high school in Neu Samara in 1917.

In 1925 they immigrated to Borden, Saskatchewan and later settled on a farm near Rabbit Lake, Saskatchewan. He was ordained to the ministry in the Hoffnungsfelder Mennonite Church at Rabbit Lake in November 1928. Cornelius served in a number of churches in the Rabbit Lake area and taught in Bible schools in Laird, Saskatchewan and Whitewater, Manitoba, each for one year.

Cornelius and Amalia moved to Greendale, BC in 1947 where Cornelius served as a lay minister in the Greendale First Mennonite Church from 1950 until his death in 1968.