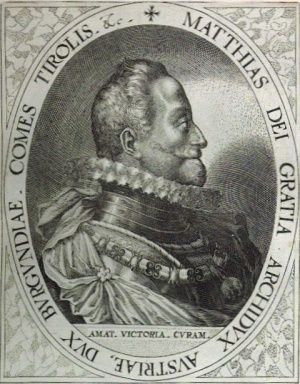 Matthias was educated as a Catholic and devoted to the church. In 1593 he was appointed governor of Austria by his brother Rudolf II. In this capacity he requested his councilors on 5 July 1600 to work out an opinion on how to expel the Anabaptists who managed mills, estates, and dairy farms in the country. The answer given on 17 July pointed out how seriously "food was taken from the Christian population" by the competition. They noted that "they had often advised how to rid the land of this kind of sectarian people and offensive intentional enemy of the Christian religion," and recommended absolute eradication (copies of these documents are in the national archives in Vienna). Thereupon Matthias induced Rudolf to issue the mandate of 23 March 1601 for Lower and Upper Austria. He argued that his brother had reported to him that in both regions there were Anabaptists who were injuring native industry by illegally engaging in crafts; besides, it was not known what they did with the money thus acquired. He therefore gave orders to expel all Anabaptists immediately, making use of the police if necessary. Landowners who continued to employ Anabaptists should be fined 500 ducats (copy in the Patentsammlung des Hans-, Hof- und Staats-archivs in Vienna).

When Matthias, at the request of Rudolf, supported the Counter Reformation in Hungary, the rebellion headed by Bocskay broke out, which caused severe damage to the Hutterite Bruderhofs situated in Slovakia, especially those in Lewar, as well as several in Moravian territory, where the troops were mustered (see Maskowitz). The treaty of peace concluded between Bocskay and Matthias on 23 June 1606 put an end to these oppressions.

The quarrel between the Hapsburg brothers soon involved the Moravian Hutterites in renewed suffering. In order to assume the government assigned to him by the archdukes and to depose his brother, who was sinking into insanity, Matthias drew up an army, which was joined by Hungarian troops, and he frequently quartered them on the Hutterian Bruderhofs. Also the troops acquired in Moravia liked to lodge in the Bruderhofs. The treaty of 24 June 1608 ceded to Matthias the government of Hungary, Austria, and Moravia; on 16 November the Pressburg Reichstag elected him king of Hungary. In the following year Matthias again turned his attention to the Anabaptists, who had been taken back by the barons of Lower Austria. He asked the authorities to report on what had previously been done about them and especially what had been done to those coming from Germany (copy in the national archives for Lower Austria in Vienna).

The Passau attack on Bohemia was followed by the mustering of new troops in Moravia, causing the Bruderhofs of Maskowitz, Stiegnitz, Olekowitz, and Niembschitz considerable hardship. Matthias marched to Bohemia, from which archduke Leopold had to retreat with his Passau troops, and was crowned as king of Bohemia on 23 May. On 13 June 1612 Rudolf died, and Matthias was elected as emperor at Frankfurt.

The Moravian diet decided on 15 August 1612, to assess each of the Hutterite Bruderhofs 100 florins (Pamatkenbuch in the Moravian national archives in Brno). Matthias had been represented at this diet by his younger brother Maximilian III, Archduke of Austria, who had a clock made by the Priebitz Bruderhof, which was famed for its clocks. In September 1613 Johann Dionysius von Zierotin, the negotiator, informed the archduke that his clock was finished, and would cost 170 florins, because the Brethren had made an identical clock for Cardinal Dietrichstein for that price. (Copy in the Zierotin archives in Blauda.)

It is reported that the emperor ordered the Dominican prior Stallhofer to expel the Hutterites from Zierotitz and Gaiwitz, and that this was done (from a manuscript in the Moravian archives in Brno). Beyond this incident the Brethren had peace during the remainder of Matthias' reign. In Slovakia they even rebuilt their Bruderhofs in Sobotište and Protzka. On 18 August 1618 the diet at Brno in the presence of archduke Ferdinand decided to assess the Moravian Bruderhofs a war tax of 50 florins in addition to the current 100 florins. Not long after, Matthias died, and the destruction of the Moravian Hutterite settlements set in.