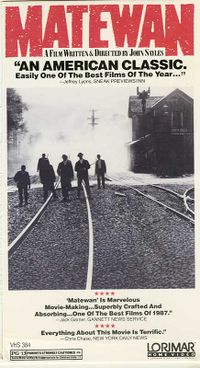 Matewan is an American drama film written and directed by John Sayles, illustrating the events of a coal mine-workers’ strike and attempt to unionize in 1920 in the small town of Matewan, Mingo County, West Virginia. Though the story is fiction many of the film’s characters are historic people.

The drama begins when the Stone Mountain Coal Company of Matewan, announces a lower pay rate for miners, who respond by calling a strike. A union organizer, Joe Kenehan, played by Chris Cooper, who is also a "red," an ex-Wobbly, and a pacifist, is invited in to organize the workers. Italian and Black miners, led by a huge man named Few Cloths, played by James Earl Jones, are brought in initially to break the strike but soon they stop working, too, and join Joe Kenehan’s union. The workers overcome their racism and prejudice in order to organize themselves against the powerful mining corporation who has hired armed thugs from Baldwin-Felts Detective Agency. Some of the miners participate in the local Baptist church in which the director, John Sayles, plays a minor role as preacher. The company agents evict miners from their homes, threaten local officials, assault miners, and use agents provocateur. Though the town’s mayor, Chief of Police and Joe Kenehan try to keep the strike peaceful the Baldwin-Felts agents are determined to punish the strikers resulting in a climatic gun fight in which Kenehan, the mayor, and several Baldwin-Felts agents are killed.

For Mennonites the film is notable for one scene. When Joe Kenehan and Few Cloths become friends Kenehan tells him that he was in Fort Leavenworth Military Penitentiary in 1917, and saw Mennonites imprisoned there for refusing to bear arms. They inspired him as they passively resisted having their beards shaved. They also ripped the buttons off their prison clothes, since these were against their religion.

Though Mennonites are mentioned by Joe Kenehan and indeed many Mennonites were imprisoned in Fort Leavenworth Military Penitentiary in 1917-19 for resisting the United States draft, the description of the punishment inflicted on the inmates more correctly describes that inflicted on several Hutterian Brethren in particular on brothers Joseph and Michael Hofer, and on David Hofer, and Jacob Wipf.

The film was universally praised; it received numerous positive reviews and received an Oscar nomination in 1988 Best Cinematography. Matewan is a sometimes called milestone of independent filmmaking, with it being one of Sayles's finest achievements.

The text from the shooting script of the film.

Joe is deep in thought as he speaks

When I was in Leavenworth there was a
bunch of Mennonites in cause they
wouldn't fight in the war. Gainst their
religion. It's also gainst their
religion to shave their beards or wear
buttons on their clothes, and they was
bein forced to do both by the prison
guards. So they refused to work. Went
on a strike, right there in Hell's Half
Acre.

They were handcuffed to the bars of a
cellhouse, eight hours a day for two
full weeks. They were put with their
arms up like this, so's they had to
stand on their toes or those cuffs would
cut into their wrists. Can't nobody
stay on their toes eight hours.
Pretty soon their fingers would start to
swoll up, they'd turn blue and then
they'd crack open and the blood would
run down their arms eight hours a
day, day after day, an still they
wouldn't work, still they tore the
buttons off their uniforms every time
they were sewed back on. Tore em with
their teeth, cause their hands wouldn't
close no more.

Now I don't claim a thing for myself
but them fellas, never lifted a gun in
their lives, you couldn't find any
braver in my book.

They sit silent for a moment

Wish them guys would get here