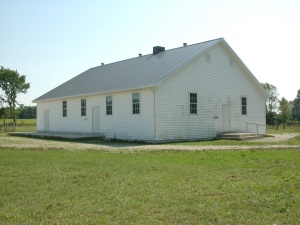 The Martinfield Old Order Mennonite meetinghouse is located in Bruce County, Huron-Kinloss Township, on Bruce County Road 6 one mile (two km) east of Holyrood on the south side of the road. Old Order Mennonites began settling in this area in the early 1990s from the Waterloo/Elmira area. The Martinfield group was started by persons wanting a more conservative lifestyle than practiced by most of the Old Order community in the Waterloo/Elmira area. Services began in the Martindale area in 1994.

Initially services were held in an improvised meetinghouse composed of two portable buildings. The Martinfield meetinghouse was erected in 2001. George Martin served as the congregation’s first minister (ordained 13 June 2000), and David Weber served as the first deacon (ordained 22 October 2000). Paul Martin, ordained as minister in 1966 for Winterbourne, transferred to Martinfield in 2001. He was ordained as Bishop for Martindale in 2005. Noah Martin was ordained as minister on 12 November 2002. As is the practice in Old Order churches, they were ordained by lot from within the congregation. Ordained persons are not paid for their church service.

In 1997, half of the families left for the Howick Orthodox Mennonite Church, a still more conservative group that did not agree with changes, such as allowing telephones in the home.

In 2004, the number of families in the Martinfield district was around 38. An accurate count of "members" is not always available because Old Order Mennonites think of themselves as members of the church at large and not just the immediate congregation. People automatically "belong" to the congregation whose meetinghouse is closest to their home.