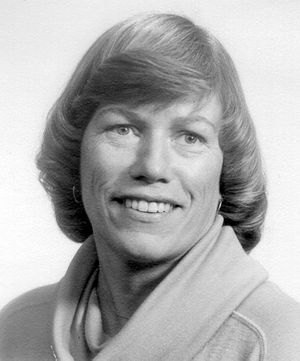 Delphine Elvera Horst, mother, counselling services founder, college board member and philanthropist, was born 10 August 1934 to Elias W. Horst (3 March 1905-5 July 1977) and Margaret Lorenz Horst (28 February 1909-2000). She was the youngest child in a family of two daughters and one son. On 26 December 1953 she married Lloyd M. Martin (8 January 1929- ). They had four sons and one daughter. Delphine died 5 September 2012 after a lingering illness in Kitchener, Ontario. She is buried in the St. Jacobs Mennonite Church cemetery.

Delphine Martin grew up in the Elmira Mennonite Church, but after marriage became part of the new Hawkesville Mennonite Church. She was quite young when she married, and devoted the next two decades of her life to child rearing and support of her husband’s growing business, Wallenstein Feed & Supply, which he founded in 1958. Over the years the business’s success led to the formation in 1998 of the Wallenstein Feed Charitable Foundation. Delphine served as a director of this private family foundation until her death.

In the 1970s Delphine decided to pursue higher education. She earned a BA in Psychology at Wilfrid Laurier University in 1977, and a MA in Psychology & Counselling at Goddard College in 1981. She also received certification in Marriage and Family Therapy through the Interfaith Pastoral Counselling Centre in 1983.

While studying, in 1978 she became the youth minister for the Mennonite Conference of Ontario, a role she held until September 1981.

Delphine Martin was one of the people that Conrad Grebel College president Ralph Lebold called together in 1981 to discuss establishing Mennonite-sponsored counselling centers in the larger Mennonite communities in Ontario. When the Waterloo office opened in 1983, Delphine was the Executive Director of Shalom Counselling Services (Waterloo). She functioned in this role for six years, and then served an additional 10 years as clinical director at Shalom until she reached age 65. She continued as a part time counsellor for an additional four years until she fully retired in 2003.

Shalom Counselling was not the only place Delphine used her gifts. Delphine and Lloyd joined the new Waterloo North Mennonite Church as charter members in 1987; she served as a lay minister on the Ministry Team in the 1990s. She also served on the Conrad Grebel College Board of Governors for 12 years—from 1979-1985, and again from 1992-1998. Her second stint included some very difficult years at the College. She also served for many years on the board of the Woolwich Counselling Centre, which provided services to the rural areas of the Region of Waterloo.

Delphine Martin was a plain-spoken woman with a distinctive voice and a memorable sense of humor. She was a gracious host, and enjoyed time at the family cottage at Chesley Lake near Allenford, Ontario. A later director at Shalom Counselling described Delphine as an “esteemed counsellor who extended much compassionate wisdom in her work with clients.”