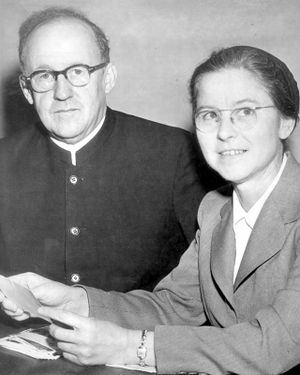 Catherine Naomi Collier Martin: Mennonite bishop's wife, women's sewing circle leader and volunteer, was born 27 February 1903 to James L. Collier (1873-1942), a Baptist, and Mary (Wilson) Collier (d. 1941), a Methodist, near Carver, Missouri, USA. Naomi was the sixth child and only daughter of nine children. The family lived in an isolated area where even circuit riders seldom rode by. They became active participants in a church planted by Mennonites (probably the Carver Mennonite Church) and Naomi was baptized and became a member there in January 1915.

On 15 August 1926 Naomi married Jesse Bauman “J. B.” Martin (1897-1974) from Waterloo, Ontario whom she met when both were college students in Hesston, Kansas. They had two daughters and one son. Naomi died on 2 September 2001. Her funeral took place 6 September at Erb Street Mennonite Church in Waterloo where she had been a member since 23 September 1951 and she was buried in the Erb St. Mennonite Cemetery.

As a child, Naomi was so fond of school that she returned to help the teacher after completing grade eight. In 1919 she went to high school in Versaille, 25 miles from home, for two years before teaching school for four years. In 1923 she enrolled at Hesston (Kansas) Academy where she met J. B. Martin from Canada. Their courtship by correspondence led to marriage on a Sunday morning after Naomi taught her Sunday school class and before J. B., who had been ordained in Ontario, preached at the evening service. The newlyweds visited missions in Kansas City and Chicago en route to their home in part of J. B.'s Old Order parents' home north of Waterloo. In 1929, after serving as pastor at the Weber congregation in Strasburg, J. B. accepted the call to be pastor at Erb Street Mennonite Church in Waterloo. They moved into the first Mennonite parsonage in Ontario, three blocks from the church.

At Erb Street, Naomi always taught Sunday school, children's and later adult classes, including men and women, and Summer Bible School. She was active in sewing circle, serving on all the committees and the executive at one time or another, and helping to organize a club for little girls. At the district level (called Women's Missionary and Service Auxiliary, WMSA, after 1955), she served as vice-president (1959-1961) and president (1962-1964). Naomi visited parishioners with her husband and she volunteered with the Rotary Club, helping feed children, some of whom were handicapped. When J. B. was appointed chair of the Advisory Council for the Ailsa Craig Boys' Farm (later named Craigwood), a home for pre-delinquent boys, Naomi worked with the WMSA to furnish the home and provide clothing for the boys. She promoted this new venture at annual WMSA meetings as well as helping the farm's matron to form a farm auxiliary.

Always gracious, Naomi hosted numerous guests from J. B.'s Ontario, Canada and bi-national church boards. Groups too large to meet at the Martin home gathered at the church and Naomi carried in the food she had prepared and served it there. She also fielded phone calls at her home and delivered the messages since the church had no phone. In 1953, the Mennonite Board of Missions sent Naomi and J. B., who had been ordained a bishop on 1 June 1947, to visit workers in Belgium and France and to help set up work in Israel.

After J. B.'s death in 1974, Naomi began volunteering in the craft room at Fairview Mennonite Home in Cambridge and in the “adopted aunt” program, visiting and building relationships with elderly residents. Naomi moved to an apartment at Fairview in 1979, putting her energy into feeding and caring for people who could no longer help themselves.

Naomi's remarkable organizing and promotional skills served her local church and beyond, especially in women's work, but her greatest contribution may well have been freeing her husband for his church wide work over many years.

Marr, Lucille. The transforming power of a century: Mennonite Central Committee and its Evolution in Ontario. Kitchener, Ont.: Pandora Press, 2003.