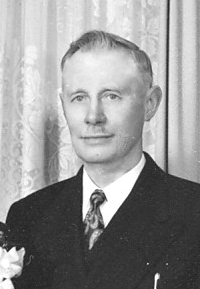 Petrus was baptized on 4 September 1906 at Berjosowka in Ufa, Russia. It was there that he and Aganetha married. Petrus was a teacher at the Armenschule in Ufa, both a boarding school and school for the impoverished, and was proud to serve with the Red Cross. In 1926, Petrus moved to Canada with his family, entering in Quebec and settling first in Steinbach, Manitoba before moving west to Yarrow, British Columbia.

Petrus Martens was ordained as a minister in the Yarrow Mennonite Brethren Church and although not gifted in practical affairs, ran a small raspberry farm. Earning an income was extremely difficult. He worked as a checker, a much coveted position, at Hulbert Hopyards, and earned a little extra money teaching at Saturday German School in Yarrow.

Martens was a rather frail and dreamy man, unsuited to physical labour, and much preferred reading and writing. He was church reporter for the Yarrow Mennonite Brethren congregation, served as church secretary, and frequently submitted articles to the Zionsbote and Die Mennonitische Rundschau. His passion for music and great affection for children found expression in his delight in teaching German folk songs to the young; although he did not have a good singing voice, he led his youthful choir by beating time with a stick. Similarly, although his teaching skills were not great, his affection for children easily compensated.

Petrus Martens was a gentle man, respected for his insight, tolerance and moderation. It might be noted that at communion services in Yarrow's early days, he was accustomed to taking a second swig of wine, clearly enjoying it.