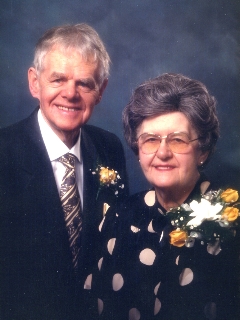 In 1925 John with his parents and siblings immigrated to Canada and settled first in Manitoba. In 1928, after a few years on the prairies, the family moved to Yarrow, BC. John was baptized at the age of 21 and joined the Yarrow Mennonite Brethren Church. His pioneering nature found ample opportunity for expression and development. John never forgot that he had started with nothing. During the Depression years he and his brother would walk the roads looking for work. For months they offered their assistance to anyone who needed help, never asking for money, always accepting what was given to them.

John H. Martens enjoyed the challenges of private enterprise but also public service, becoming involved in both local government and church. During a span of 40 years he was involved in several businesses that included Yarrow Freight & Fuels, Clearbrook Frozen Foods, Glacier Cold Storage, Diamond Construction and Romar Construction. For 10 years before his retirement he worked for Columbia Bitulithic, a road surfacing company. After his retirement John thoroughly enjoyed landscaping at the MSA Manor.

For years John inconspicuously supported foreign missions, Christian schools, and music ministries within the church and community. Many individuals and organizations were able to continue their service to God because of John’s generous financial support.

Martens was also active in civic politics. From 1946-1956 he served on the Chilliwack city council and for 23 years he was a member of the Yarrow Waterworks Board. John wanted the best in all matters pertaining to the welfare of the community. On 7 February 1967 he was recognized as Citizen of the Day, and received a citation that read: "Johnny Martens is one of B.C.’s foremost construction leaders and a community inspiration in the Yarrow and Chilliwack areas. His professional knowledge came in very handy during his life in the Fraser Valley - particularly as chairman of the Municipal Council’s Public Works Committee and as one of the leaders of recovery operations during and after the disastrous Fraser River Flood of 1948."

He was also acknowledged for his contribution to the organizing and planning of the fifth British Empire Games in 1954. In 1962 John Martens was the spokesperson that convinced the then Minister of Highways, P.A. Gaglardi to build an overpass at the intersection of No. 3 Road and the Trans-Canada Highway, near Yarrow, BC.

John was a negotiator and peacemaker and is remembered as one with tremendous optimism, a positive encouraging attitude, and an unquestionable faith. With his genuine optimistic spirit John often expressed his love and concern for each member of his family. He showed extensive support for his wife Sarah, a conscientious homemaker and willing helper. Both John and Sarah faithfully encouraged their four daughters to participate in the music of the church. John’s focus was to maintain a positive attitude and his life reflected God’s promise, “Blessed are the peacemakers for they shall be called children of God.”