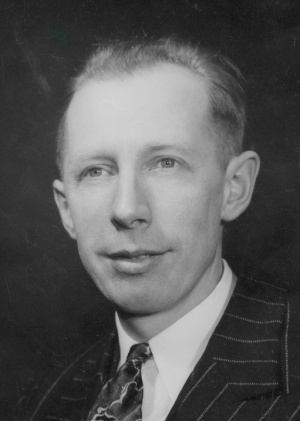 In 1926 Jacob P. Martens moved to Canada with his parents and siblings, settling first in Manitoba. He was baptized in July 1929 in Grüntal, Manitoba. In 1930 the family moved to British Columbia where they settled in Yarrow. It was in the Yarrow Mennonite Brethren Church where he and Sarah married. Jacob lived in Yarrow from 1930 to 1967, after which he moved to Clearbrook, BC.

Because circumstances in Russia necessitated fleeing the country, thus depriving Martens of a formal education, he was unable to pursue his chosen career as a medical doctor. In 1937 Martens began his career as an entrepreneur with the inception of Yarrow Lumber Yard. He flourished as an entrepreneur, becoming a pivotal person in various ventures, including Yarrow Central Agency, Arrow Building Supplies, and Clearbrook Frozen Foods. This latter enterprise existed in 2006 under the control of a major corporation. His wife Sarah provided an anchor for this free-spirited man. Her own career interests were subsumed as her presence allowed for family routine and discipline while Jacob tended to business interests. Her input was crucial as Jacob regularly consulted her regarding decisions related to business and family. As a businessman, his integrity was unquestioned. This reputation enhanced his early success when the flood of 1948 necessitated rebuilding, and the surrounding community preferred to deal with him.

Successful entrepreneurs were often perceived with some suspicion by the Mennonite community. As a businessman, accepted within the church, Martens' quiet influence was vital as the immigrant culture struggled with the issue of integrating into the wider dominant culture. He played an instrumental role as treasurer of Yarrow Mennonite Brethren Church. Teenagers benefited from his support of athletics, particularly softball, at a time when Yarrow provided few recreational opportunities for them.

As a philanthropist, Martens was deeply involved with Yarrow's Sharon Mennonite Collegiate. He was later elected with two others to investigate the feasibility of building a facility for the elderly in Clearbrook, BC, and subsequently served as chairman of Tabor Home Society from 1966 to 1978. He was an exceedingly generous man; missionaries, students, various organizations and many individuals were recipients of his financial assistance. His vibrancy, kindness and sense of humor endeared him to many.