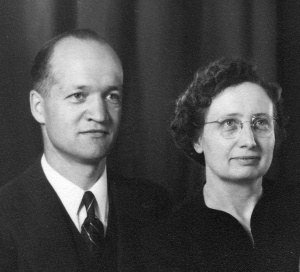 Frank accepted Jesus as his Saviour in 1922 and a year later was baptized into the Main Centre Mennonite Brethren Church.

Frank began his post secondary studies at the Herbert Bible School in Saskatchewan. In 1926 he moved to California where he lived for the next ten years. While here he enrolled in the Bible Institute of Los Angeles (BIOLA). After graduating from this school, Frank availed himself of some missionary medical training, anticipating a missionary assignment in Africa.

In 1936 Frank was invited to teach at the Herbert Bible School. Although he taught only one year in Herbert, it was here that he came in contact with Canadian Bible Society, whose mission it was to distribute and sell Bibles. This ministry deeply appealed to Frank. After some further training, he was assigned as a Bible colporteur to the West Coast of British Columbia, making Victoria, BC his physical home and Immanuel Baptist Church his spiritual home. Over the course of the next several years he traveled to 118 islands, making presentations and visiting homes as far north as Steward, Alaska.

Following his retirement as a colporteur, Frank and his family returned to Victoria, BC, where he became the treasurer of the Society, while his wife Mary worked in the Bible Society bookstore. He continued to be active in the distribution of Bibles. In total, Frank served the Canadian Bible Society for 50 years.

In September 1986 the Martens family moved to Abbotsford, British Columbia where they became active members of the Bakerview Mennonite Brethren Church.