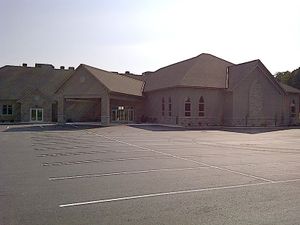 Wellesley Township in Waterloo County, Ontario, Canada was a "clergy reserve," which meant proceeds from land sales were intended to support Protestant churches, primarily the Church of England. The regulations for such sales were complex, and it was not until these lands were removed from church control in the 1850s that extensive settlement took place. This included Amish Mennonites from the adjacent Wilmot settlement. In 1859 a Wellesley Amish Mennonite congregation was established; John Jantzi was the bishop, along with ministers John Jausie and Joseph Lichti, and deacon John Gerber. As was the Amish custom, services were held every two weeks in homes.

In 1867 the Wellesley congregation built a small frame structure on the site of its cemetery. It was used only as a shelter for the immediate family at the time of funerals. The land on which the cemetery and funeral chapel was located was deeded to the congregation on 11 July 1870 by Leonard Streicher for $30.00.

In 1886 a majority of the congregation decided to replace the funeral chapel with a larger meetinghouse. Those members, including a deacon, who chose to continue to worship in homes became known as "house Amish," and eventually Old Order Amish. Until 1891 this group was served by bishops from Holmes County, Ohio for ordinations, baptisms and communion services. This group continues as part of the Milverton Old Order Amish settlement.

The Poole Mennonite Church, located in Mornington Township of Perth County was a daughter congregation of Wellesley Amish Mennonite. It was formally organized in 1874. In 1949 a former Presbyterian church was purchased in Crosshill, and led to the formation of the Crosshill Mennonite Church. Crosshill was considered an extension of Maple View until 1970, when it became an independent congregation.

Another division, in 1987, took place when 15 families left Maple View to form what became the independent Faith Mennonite Church, that in 2016 was meeting in a modern facility in Kingswood.

In March 2020 Maple View withdrew from Mennonite Church Canada and Mennonite Church Eastern Canada and became an associate member of the Ontario Conference of Mennonite Brethren Churches. The withdrawal from MC Canada was rooted in disagreement with the theological directions taken by that conference.

Gingerich, Orland. The Amish of Canada. Waterloo, ON: Conrad Press, 1972.

Maple View Amish Mennonite Church, north of Wellesley, Waterloo County, Ontario, was organized in 1859 with John Jantzi (1806-1881) as bishop by members of the Steinmann congregation in Wilmot Township who had moved a few miles northward into Wellesley Township, and was long called the Wellesley congregation. It was a member of the Ontario A.M. Conference. Meetings were at first held in the homes until a meetinghouse was erected which was to be used only as a funeral chapel. When the house began to be used for regular worship services (1886) a group opposed to this withdrew to continue as the Wellesley Old Order Amish. They were joined by a group which withdrew the same year and for the same reason from the nearby Mornington (Poole) A.M. congregation. In 1954 the Old Order group still had three districts, with a total of 260 baptized members. In 1912 again a conservative faction broke away from the Wellesley A.M. group to organize a separate congregation, called the Lichti group after its leader, Bishop Jacob Lichti. This group built a meetinghouse a half mile east of the Wellesley A.M. church. It continued to use German exclusively, sang from the Ausbund, and had no Sunday school. Thus it was in a sense "Old Order," although it had no fellowship with the Wellesley "House Amish" Old Order group. In 1954 it had 200 members, and was called the Cedar Grove A.M. congregation.

The Poole (Mornington) A.M. church was an outgrowth of the Wellesley A.M. settlement. It was formally organized in 1874 although it did not build a meetinghouse until 1886. The meetinghouse was the occasion of an Old Order split paralleling that at Wellesley in the same year, called the Mornington Old Order Amish group. In 1904 a second schism occurred in the Poole A.M. congregation, led by Bishop Nicholas Nafziger, which built a meetinghouse in that year, but continued to use the German language and the Ausbund and had no Sunday school. It paralleled the Lichti congregation and in 1954 had 175 members. It was locally called the Nafziger church, although its official name was Mornington. Mornington and Cedar Grove were reckoned with the Beachy Amish group. In 1928 a new frame church was erected, and the name Maple View was adopted to replace the name Wellesley.

Bishops who served the congregation before the use of the meetinghouse were John Jantzi, Christian Gascho, Christian Wagler, and Christian B. Zehr. Samuel L. Schultz (1883- ) served as bishop after 1941. In 1954 Samuel V. Leis, Chris S. Streicher, and Allen Y. Bender were serving as ministers. An outpost was operated at Crosshill. The total membership of the two places was 457. The congregation has been slow in adopting the English language for its services and long retained the Ausbund as its hymnal.

Thus in 1954 there were six congregations on three distinct levels, with a total of 1,092 members, the outgrowth of the original Wellesley congregation of 1859.