From GAMEO
Revision as of 23:25, 15 January 2017 by RichardThiessen (talk | contribs) (Text replace - "<em class="gameo_bibliography">Mennonitisches Lexikon</em>" to "''Mennonitisches Lexikon''")
(diff) ← Older revision | Latest revision (diff) | Newer revision → (diff)
Jump to navigation Jump to search
A checked version of this page, approved on 15 January 2017, was based on this revision. 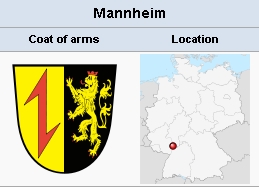 Mannheim, most populous (1955 population, 254,000; in 2005, 307,000; coordinates: 49° 29′ 20″ N, 8° 28′ 8″ E) city of Baden, Germany, situated at the confluence of the Neckar with the Rhine, founded by Elector Palatine Frederick IV in 1606. The builder was Barthel Janson, a Dutch citizen. The city was destroyed by Tilly in the Thirty Years' War, and rebuilt in 1653 by Elector Charles Louis, who developed it into the chief commercial center of his domain. By settling Walloons and Huguenots there he made it a haven of religious toleration and liberty. On 13 November 1688 it was seized by the French and burned the following March. Elector John William engaged Franz Timmermann, the Dutch teacher of Peter the Great, to rebuild it. Mannheim was the capital of the Palatinate 1720-1778; in 1803 it fell to Baden.

In 1655 two Hutterite emissaries from Sobotište, Jakob Amssler and Christoph Baumhauer, obtained permission to establish a Hutterite Bruderhof here. The terms agreed upon stipulated that (1) their house or houses should be built of stone, be roofed with tile, and be two stories in height; (2) they should enjoy all the privileges of citizens, could receive foreigners into the brotherhood, but citizens only with the previous knowledge of the authorities; (3) they should have penal authority over their own members; (4) they were exempt from all service in the army or court, or any other pertaining to the sword; but (5) they should pay their annual rental fee and other taxes, according to the regulations; (6) for five years they should be exempt from payment of a protection fee, and beginning in 1661 pay an annual sum of 50 florins; (7) concerning civic obligations they should come to an agreement with the city authorities; (8) each of the contracting parties might terminate the agreement upon a half year's notice; in that case the Brethren should be permitted to sell their property and take their goods with them (Beck, Geschichts-Bücher, 492 f.). Each member over fifteen years of age was to pay a recognition fee of ten florins per year (Walter, I, 292).

According to Struve they were "poor but industrious people, who would not have agreed with all Anabaptists, especially not with those who doubt the divinity of Christ. They practiced community of goods, engaged in all sorts of handicrafts except the manufacture of instruments of war, and did not marry outside their brotherhood" (Walter, 292; from a letter written by Heinrich Clignet in 1672 to Prof. Joh. Heinrich Ottius of Zürich, author of the Annales Anabaptistici.

According to the records of the council of 23 November 1664, the Hutterian Brethren built their first houses in 1652. In 1666 there were eight families. Probably in consequence of the plague their number decreased, for in 1670 there were only four families left: Moses Wirtz, a cooper and their preacher and leader (Vorsteher), Joseph Grütmann, a potter, Abraham Zahn, a knifesmith, and Heinrich Weinwurm, a tailor. There was also a blacksmith among them. (Liselotte, the daughter of Elector Charles Louis, as a child frequently visited the Bruderhof and at an advanced age in 1718 still recalled clearly having watched them at work, "of whom one made handsome knives of fragrant wood, another was a potter, and another swung the smith's hammer.") After his death they let the smithy to an outsider, but reclaimed it in 1671, for additional brethren had arrived from Hungary. Like the Jews and the Polish Brethren (Socinians who had settled there at the same time as the Hutterites, but had remained only three years), they were not drafted for statute labor or guard duty, but instead paid an annual redemption fee. From the record of the council determining the amount of this fee, dated January 1674, we learn that there were at that time 13 families in the Hutterite settlement. In June another family moved in. Their leader was now Joseph Grütmann. The council records say of him that the brotherhood in Hungary put him in charge of the settlement, to see that the buildings were kept in good repair until they could be sold. Several members joined the Reformed Church; in 1684 Jakob Grütmann also took this step. The city records state that on 9 December 1684 the brotherhood was dissolved and the property divided; its value amounted to 1,332 guilders (Mannheimer Geschichtsblätter II, 56).

It is possible that the Swiss Brethren settlement in Mannheim was older than that of the Hutterian Brethren. Definite information is lacking. Risser, the minister of the Sembach congregation, asserted that "from 1650 on, Mennonite families from the Palatinate and new ones from Switzerland moved into the depopulated city and in inconspicuous quiet formed a small congregation led by their elder; their life and civic industry was by no means a deterrent to the reviving city" (Mennonitische Blätter). The earliest Mennonite lists of die Landesarchiv at Karlsruhe do not mention any Mennonites living in Mannheim. It is possible that they were at first exempt from the redemption fee. Heidelberg reported on 12 February 1662 that there were no Mennonites in its territory, since most of them were living in Mannheim. From Dirmstein it is learned (17 May 1682) that occasionally a preacher came to Obersülzen from Mannheim to hold a meeting. This is proof that there was a Mennonite church in Mannheim at that date. Ernst Müller (p. 315) mentions a letter sent by Peter Lehmann and Rudy Heusser from Mannheim to the Swiss Brethren dated 23 December 1697. (In June 1697 a very destructive fire raged in Mannheim.)

On 10 March 1701 the city council received an inquiry asking whether the Mennonites were considered citizens or mere residents. The reply, dated 6 May, stated that five families were granted citizenship, partly because of the substantial houses they had built and partly on the basis of their peaceableness; but since the council was aware that this procedure was displeasing to the elector they had admitted no more Mennonites the last two years.

On May 9 the city mayor inquired of the elector whether the request of another Mennonite for citizenship should be granted. He said further that the six families living there now and the 20 families living there earlier had not only built well, but had in all respects conducted themselves honestly and compatibly. In June 1702 the Mennonites of Mannheim sent a petition to the elector, requesting that Mennonites moving into the city be permitted to become citizens as heretofore without having to obtain a special concession. This petition also states that before the destruction of the city in 1689 there had been twenty families living there. On 4 July 1702, Jakob Snebly, a Mennonite citizen of Mannheim, requested and received certification of their status from the French occupation authorities, which stated that the Mennonites had complied with all their civic obligations such as statute labor and guard service.

On 27 April 1706 at the request of the city authorities, Christian Blum drew up a list of members: there were 11 families, Christian Blüm, Johann Jakob Schnäbele, Ulrich Mayer, Hans Müller, Christian Eicher, Matth. Bonn, Paulus Enger, Martin Meule (Meile or Mellinger?), Christian Stauffer, Johann Hassert, and the widow of Johann Schüler (?), On 14 May 1706 the mayor sent this list to the elector, and asked whether more should be admitted, since they were making frequent application; also whether preference should be given those who had money to build at once. The reply was that the Mennonites now living in Mannheim should be gradually put out of the city, since they were not to be tolerated in the province. From this time on the Mennonites appear regularly in the registers, which give some interesting testimony concerning their life and status.

In 1732 the Mennonites numbered 35 families: there were Mennonites living outside the city on the Kirchgarthauserhof, Grafenau, and Hemshof (see Friesenheim). In the early 18th century Hans Jacob Schnaebele (Schnäbeli) was preacher. Martin Möllinger was elder 1761-ca. 1772; the preachers were Johann Huntzinger, Heinrich Pletscher, Christian Schumacher until about 1772, Jakob Plätscher 1741-?, Jakob Hackmann 1741-?, and Jacob Gerber 1775-? ([[Naamlijst der tegenwoordig in dienst zijnde predikanten der Mennoniten in de Vereenigde Nederlanden|Naamlijst]]). The deacon was David Bechtel (Müller, 221).

Great anxiety came upon the leaders of the congregation in 1742, when they were ordered to pay the withdrawal fee for some brethren who had moved out of the city. The petition they sent to the government for release from this burden states that Pletscher had gone to Eppstein in 1737, Peter Holl to Eppstein and on to Krefeld in 1741, Johann Stauffer also to Krefeld, and Jakob Getty to Kirchheim near Heidelberg in 1738. Abraham Mossemann had settled at Mühlau near Mannheim; on 12 January 1742 he was assessed the protection fee from the middle of October 1741.

By 1774 the congregation of Mannheim had apparently fallen into decline, having neither an elder nor a preacher. Preachers of neighboring congregations occasionally served at Mannheim (Naamlijst 1786).

In 1782 a certain Count Bock described a visit he paid to the Mennonites in Mannheim. Their place of meeting was a large hall. In the background was an armchair, elevated somewhat above the benches filling the room. Before this chair stood a table with a Bible on it. This was all there was in furnishings. At the entry were the words, Zum Haus des grossen Vaters.

On 11 June 1792 the leaders presented a petition to the government, requesting that the impoverished Daniel Möllinger be excused from his protection payment. On it the mayor remarked that the Mennonites never made a petition of this nature without serious cause. One of the outstanding preachers was Martin Möllinger (for his correspondence with Steen in Danzig, etc., see Mennonitische Blätter , 1854, 30 and 44 f., and Gem.-Kal., 1935, 112-20). Finally the congregation was served for a time by Leonhard Weydmann, the Monsheim minister. About 1830 it was dissolved. Its capital, which amounted to several thousand guilders, was given to the city poor fund and to the Protestant Church. The few members who had remained true to the faith of the fathers transferred to Friesenheim and other congregations.

The archives of the Reformed Church in Mannheim contain four Mennonite church record books, which are of great interest to students of family history.