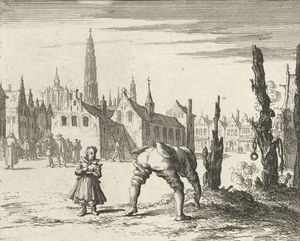 Maeyken Wens, an Anabaptist martyr, burned at the stake at Antwerp, Belgium, on 6 October 1573. The Dutch martyrbooks following the Historie der Martelaren of 1615 contain five letters by Maeyken, which are also found in van Braght's Martyrs' Mirror. Two of these letters are addressed to her husband Mattheus Wens, two to her son Adriaen, and one to Jan de Metser, a preacher or a deacon of the congregation. These letters are among the most moving parts of the martyr literature, both in the firmness and purity of Maeyken's faith and in the care she shows for her children. "The Lord be forever praised for the great grace He has shown me, who have feared so much. My dear brother in the Lord, always watch, for the Lord will come like a thief in the night," she wrote to Jan de Metser after she had been sentenced to death. And to her husband: "O my very dear and beloved husband, pray to the Lord heartily in my behalf, to remove the conflict from me; for it is in His power, if it is His pleasure." To her son Adriaen, only 15 years old: "Write me a letter as to what your heart says, whether you desire to fear the Lord; this I should like to know. But you must write it better than the last two letters were written; the one which Maeyken Wils brought, however, was good." In the second letter to her son, a farewell letter of 5 October: "Adieu once more, my dear son Adriaen; ever be kind, I pray you, to your afflicted father all the days of your life, and do not grieve him. ... I have written this since I was sentenced to die for the testimony of Jesus Christ."

Maeyken had been arrested in April 1573. She was imprisoned in the Steen castle of Antwerp, where her husband and her children sometimes visited her; they also wrote some letters. One of these letters, written by her husband, has been preserved, and is now found in the Amsterdam Mennonite archives. This rare piece is the more precious, because on the back of the paper is written Maeyken's farewell letter of 5 October to her children, the only existing autograph letter of a martyr.

Maeyken was executed on the morning of 6 October, with a tongue screw to prevent her from addressing the crowd as martyrs often did. Her son Adriaen watched the execution, but when his mother was tied up to the stake he fainted. When he regained consciousness he looked for the tongue screw in the ashes where his mother had been burned, and took it as a memento of his mother.

There has been some question on the identity of this martyr. Since Génard did not find her name in the records of Antwerp, the Bibliographie even suggests that she may never have existed, the account in the martyrbooks being merely a fantasy. But this is not the case. It has been clearly shown, as the Bibliographie reluctantly admits, by Samuel Cramer (Doopsgezinde Bijdragen 1904, 127 f.) that Maeyken, the wife of the mason Mattheus Wens, being a native of Dissenbeke in Flanders, was in the official Antwerp records called Maeyken van Dissenbeke and in the martyrbooks Maeykens Wens. In 1566 about 50 persons of Antwerp, suspected of Anabaptism, were summoned to answer to the magistrates for their heresy; among them were besides Janne de Weese (i.e., the preacher Jan de Metser, to whom Maeyken wrote her letter in prison) also "Mattheus Wens, mason, and Maeyken his wife," having been living "in den oudenaertschen ganck" (Oudenaerde lane). They did not appear to answer, apparently because they had fled from the city. They later must have returned.

The autograph letter by Maeyken was acquired by the Amsterdam Mennonite archives in 1902 at a public auction.

Braght, Thieleman J. van. The Bloody Theatre or Martyrs' Mirror of the Defenseless Christians Who Baptized Only upon Confession of Faith and Who Suffered and Died for the Testimony of Jesus Their Saviour . . . to the Year A.D. 1660. Scottdale, PA: Herald Press, 1951: 979 f. Available online at: http://www.homecomers.org/mirror/index.htm.