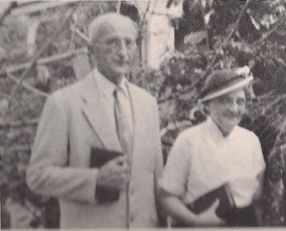 Loewen was baptized on 28 May 1917 and became a member of the Bergthaler Mennonite Church of Manitoba. On 5 October 1932, Loewen was ordained to the ministry of the Bergthaler Mennonite Church of Manitoba at Altona. He loved to preach and promote missions at home and abroad. As early as 1938 he was saying publicly that he had a call to foreign mission work, according to Bergthaler historian Henry Gerbrandt. Gerbrandt wrote, "although the church listened and also helped finance his schooling, neither his education nor the health of his family allowed the mission boards to send him."

For a period during the 1940s David and Anna Loewen lived in Winnipeg and attended the Bethel Mennonite Mission Church (later known as Bethel Mennonite Church) which Benjamin Ewert had organized in 1938. The Loewens also went as missionaries to Mexico for a brief period. In the early 1950s they spent some time in Florida, where it became clear to David that the Lord wanted him to establish a mission in the Caribbean. In 1954 David and Anna went to Jamaica where they founded the Jamaica Mennonite Church in 1955. The work which the Loewens began was taken on by the Virginia Mission Board a little later when Myron and Esther Augsburger arrived and the Loewens returned to Manitoba.

In 1963 Loewen retired and moved to Clearbrook, British Columbia. Here he continued to serve in the West Abbotsford Mennonite Church until his death. He is remembered above all for his preaching and promotion of missions at home and abroad. According to H. J. Gerbrandt, Loewen was an important voice in the church who for many years was like "a voice crying in the wilderness . . . his consistent prodding prayers and personal sacrificing served as conscience pricks to many in the church." Loewen died in 1972 and is buried in the Hazelwood Cemetery in Abbotsford, British Columbia.