From GAMEO
Revision as of 22:55, 8 November 2016 by RichardThiessen (talk | contribs) (Text replace - "<strong>Denominational Affiliation</strong>:" to "'''Denominational Affiliation''':")
(diff) ← Older revision | Latest revision (diff) | Newer revision → (diff)
Jump to navigation Jump to search
A checked version of this page, approved on 8 November 2016, was based on this revision.

In the spring of 1954 a few men from Franconia Mennonite Conference interviewed residents of Sullivan County, Pennsylvania, and found a positive response to starting a Mennonite church in the area. It began with a children’s program, and in August 1954 Mennonites from the Franconia area held the first Summer Bible School in Sullivan County history, on the grounds of Elkland Holiness Camp. Average daily attendance the first year was 140 children.

In 1956 the Franconia Mission Board started a church and called Henry Goshow, a successful young butcher from Franconia and member of the Rockhill Mennonite Church, to serve as pastor. Henry and his wife Irene moved with six children to Sullivan County. Henry was licensed for ministry on 28 June 1956 and ordained two years later on 7 September 1958. He served as pastor until 1979, with assistance from lay leaders John and Susan Souder (also former Rockhill members) in the 1960s and following.

The congregation was called Estella Mennonite Church and met in a former Disciples of Christ church in Estella. The building had not been occupied as a church for 25 years, and much work was needed to prepare it for use. Mennonites from eastern Pennsylvania provided help. Allentown Mennonite Church donated used benches; Henry Goshow's brother-in-law gave money for hymnbooks. Since there was only one large room, curtains were made to partition off areas for Sunday School classes. A new woodstove was purchased and the church made ready for dedication. 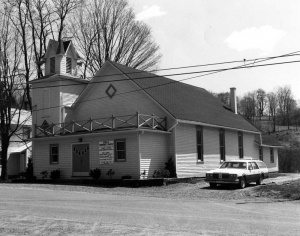 Marlene Keller Benner later reported, "On Sunday evening, after Bible School, August 19, 1956, the sound of a church bell that had been silent for over 25 years pealed out across the village of Estella. Folks who had worked hard to repair the church, community folks, friends, relatives, and workers filled the church to capacity…. The opening dedicatory sermon was preached by Brother Marcus Clemens, dedicating the church building and workers to the cause of presenting Christ to the community.” By the end of the first year, the church had 25 members, eight of whom were from the local community.

Early in the 1970s the wind of the Holy Spirit blew over the Endless Mountains and Sullivan County. For many years Marvin and Dorothy Groff held weekly meetings in their garage for 50 to 75 people. Mel Good cleared his machinery barn once a week for meetings and named it the "Glory Barn." The Mennonite parsonage at Estella became the "Prayer House," with prayer and praise services every Wednesday evening. These meetings attracted a positive response.

The first full time paid pastor was hired in 1979—Dan Eby, who was a 23-year-old graduate of Elim Bible Institute, Lima, New York. Dan led the congregation through a significant process in 1983 when Estella Mennonite Church incorporated and changed its name to Living Hope Fellowship. Since only a few members were culturally "Mennonite," the new name more accurately reflected the church’s identity. People from a variety of backgrounds—Roman Catholic, Brethren, Greek Orthodox, Methodist, Presbyterian, and Mennonites—fellowshiped around a “Living Hope” in Estella. After Dan Eby’s pastorate ended in the mid-1980s, a team of elders led the fellowship until Randy Brunstetter was called as full time pastor in 1991.

In the mid-1990s the congregation experienced growth and conflict related to the “Toronto Blessing,” a neo-charismatic movement. Young people, in particular, began to experience God’s presence in unexpected ways. Some were filled with inexpressible joy; some wept uncontrollably. People falling over and other manifestations sometimes disrupted worship services. Youth from across Sullivan County filled the building with a desire to meet God. At the same time, the ministry of Promise Keepers had a significant influence on the men of the congregation, and the women of Living Hope were busy helping to establish the Endless Mountains Pregnancy Care Center. The church grew quickly to more than 100 regular attendees, but conflict hindered relationships, and within four years the congregation was struggling to maintain its vision.

In 1999 Living Hope began to seek a new denominational affiliation. After a season of discernment, the congregation chose Hopewell Network of Churches—a fellowship of evangelical, charismatic, Anabaptist churches. On 2 December 2002 Living Hope Fellowship officially joined the Hopewell Network. Representatives of Franconia Mennonite Conference and many of Living Hope’s former pastors were present to bless the new affiliation. Scot Magann, a longtime member, was ordained as Senior Pastor and continued in 2012 to lead the congregation in its mission of “experiencing the cross of Christ in caring community.”

In 2006, Living Hope Fellowship celebrated their 50th anniversary and the building’s 100th anniversary. A large-scale building renovation was done, adding classrooms, a kitchen and utility room, fully funded by the membership. In 2012, the congregation once again had more than 100 regular worshippers.