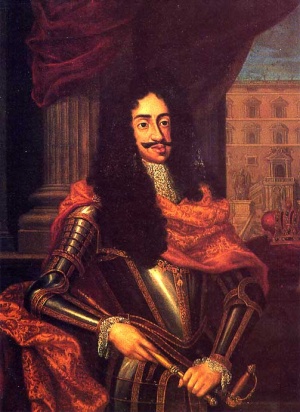 Leopold I, Emperor of the Holy Roman Empire, 1658-1705, was born 9 June 1640, the second son of Emperor Ferdinand III and Maria Anna of Spain. He became his father's heir upon the death of his older brother, King Ferdinand IV of Hungary, in 1654.  He was chosen to succeed his brother as King of Hungary in 1655 and King of Bohemia in 1656, and was elected Holy Roman Emperor a year after his father's death in 1658.

Leopold's reign covered a long period of 47 years. He was a friend of the sciences and of music, a composer, and a lover of books; personally fond of splendor and full of the joy of living, his morals were above reproach. The influence of his Catholic education was felt in the severe and unjust treatment of Protestants, which sometimes resulted in revolts, especially in Hungary. Through the good fortune of having able generals, he raised Austria to the status of a great world power.

The struggles "with Turks and Tartars" resulting from his interference in Transylvania caused the Hutterian Brethren at Alwinc much suffering. In Slovakia (then belonging to Hungary), where they had become a cultural factor, the emperor granted them a letter of protection (Protektionsschreiben und Privilegium) on 29 January 1659 (the only one ever granted by a Hapsburg ruler), for the districts of Neutra, Pressburg, and Trentschin, directing the authorities there to give them full protection. But this did not prevent the quartering of troops and the burning of parts of these Bruderhofs as well as that at Alwinc in the first Turkish war in 1663-1664. A copy of the "privilege" is kept in the Imperial Chancellery at Vienna; Beck reprints it in his Geschichts-Bücher (496).

The imperial government at that time took a hostile attitude to the Mennonites of Germany. In 1672 it protested the settlement of 300 to 400 Mennonites in Hamburg, calling their admission a violation of the Instrumentum of the Peace of Westphalia. The Hamburg senate nevertheless warmly defended them, declaring that the Mennonites "are peaceful and also capable citizens, who have nothing to do with the Anabaptists of Münster, but have instead taken the government into their church prayer."

The severity of Leopold's enforcement of the Counter Reformation led to a revolt and to the second Turkish war. Four years previously the Jesuits, accompanied by soldiers, had entered the Bruderhof in Sobotište and had made a futile attempt to convert the Hutterian Brethren; now another attempt was made by summoning the leaders Foley and Milder  to court. But the steadfastness of the Brethren, and the lenience of Archbishop Kollonitsch, president of the Hungarian chancellery, put an end to the oppression of the Hutterites. Against Lutherans and Calvinists, however, it continued unabated; members of their clergy were sent to the galleys.

The Brethren suffered very severely in 1683 at the hands of Turkish and Hungarian troops overrunning the country after the Turkish defeat. The victory at Munkacs and Belgrade strengthened the imperial rule. In 1688 Kollonitsch ordered that the Hutterite children in Velke Levary  be baptized. Some obeyed, thus making the first breach in the brotherhood. The Brethren at Alwinc put an end to the demoralization and reorganized their Bruderhof in 1694.

In Jülich the emperor also intervened in favor of the Anabaptists in 1694. Elector Johann Wilhelm had (through a band of peasants and soldiers, led by three commissioners) attacked the Mennonites in Rheydt, especially those settled as tenants on the estates of the nobles. This band plundered and destroyed much on these estates, and kidnapped about 30 persons, including women and children, mistreating some of them. The Krefeld Mennonites redeemed them at great cost. This disgraceful persecution evoked intervention by foreign powers. King William III of England wrote a letter to the elector on 11 August 1694, requesting that the persecution be stopped, the property be restored, and that protection be granted them in the future. The Dutch States-General on 16 September made an earnest protest to the emperor himself, with the same demands, pointing out the bad precedent set here in John William's attitude toward peaceful and quiet subjects like the industrious and competent Mennonites. Thereupon the emperor actually appealed to the latter to spare them, admitting that the Peace of Westphalia declared only "three religions permissible in the empire," and that "said Mennists were not included" among them; but he asked the elector to consider the weight and importance of the foreign intercessors. Johann Wilhelm replied that the Mennonites had been settled in his territory without his knowledge by avaricious officials, but finally yielded, and on 17 August 1697, restored the possessions of the refugees, including the confiscated books and printed matter, gave them permission to sell their property, and promised to grant them free "commercium" in his domain.

There is no record of further oppression of the Mennonites before the death of Leopold I on 5 May 1705. He was succeeded by his son Joseph I.