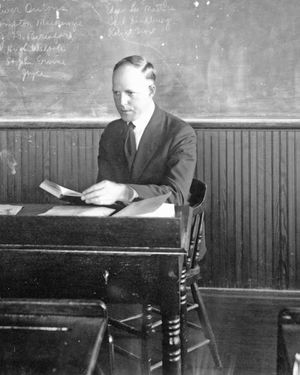 Ernest Erwin Leisy: professor: was born on 22 December 1887, in rural Garden Township, north of Halstead, Kansas, USA to Emil A. Leisy (13 September 1860-29 March 1918) and Lena Krehbill Leisy (15 February 1864-24 February 1939). He was the oldest child in a family of 12 children. On 14 August 1917 he married Elva Agnes Krehbiel (1 December 1891-25 December 1982); they had three children--Melvern, Margaret and James. Ernest Leisy died on 8 March 1968. Services were in Cox Chapel of Highland Park Methodist Church, which the couple attended throughout their residency in Dallas. Ernest and Elva Leisy are buried at the Halstead Mausoleum, Halstead, Kansas.

Ernest Leisy chose to attend Moundridge High School and graduated in 1906. He then taught one year in a country school, 1906-1907 (Harvey County, District 12), and from 1907-1911 attended Bethel College (part-time in 1909-10 while he taught in McPherson County, District 25). Leisy completed his undergraduate education with a BA in English from the University of Kansas in 1913. He then received a scholarship and studied for one year at Harvard University. He returned to Kansas and taught at Bethel College from 1914-1919 with a leave of absence in 1916-17 to work on and obtain his MA from the University of Chicago, 1917. In 1919 he resigned his position at Bethel and continued his education and teaching at the University of Illinois, receiving his PhD in 1923.

Leisy was drafted in World War I in August 1918 and sent to Camp Funston, Kansas. There he declared himself to be a conscientious objector but willing to wear the uniform and perform work as long as he was not required to carry a weapon. He only spent three or four days at Camp Funston and was sent home because he failed a physical exam due to foot problems. He wrote an unpublished account of his draft experience, "The Martial Adventures of a Conscientious Objector," in which he recorded in explicit detail the verbal abuse directed at COs, including numerous f-words. His expletive-filled account seems unusual for a Mennonite and respectable college professor of his generation.

Following a four-year teaching stint at Illinois Wesleyan, 1923-1927, he moved to the English Department at Southern Methodist University (SMU) where he taught until his retirement in 1957. Leisy also taught in various universities, including Oxford, Duke, North Carolina, Vienna, and Bonn during summers and sabbaticals. Ernest Leisy was an active participant and leader in numerous professional organizations. He also authored many books, articles, and book reviews. 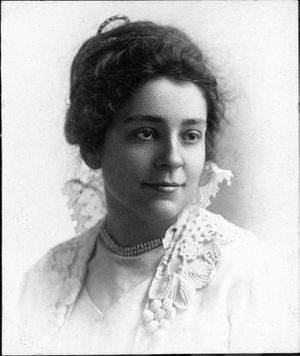 Elva Krehbiel Leisy was born 1 December 1891, at Halstead, Kansas, to Henry Peter Krehbiel (13 April 1862-2 December 1940) and Matilda Kruse Krehbiel (17 March 1867-20 April 1931), who came to Harvey County from Summerfield, Illinois, in the 1870s. Henry Peter Krehbiel was the founder of the Herald Publishing Company, which published the Mennonite Weekly Review. Elva graduated from Newton High School in 1908, then attended Bethel Academy/College, 1908-1911, and graduated from Oberlin College in 1912. She taught high school for one year at Moundridge High and then taught English at Bethel Academy for two years, 1913-1915. In the summer, 1915, Elva traveled to the west coast and visited her relatives and also Ernest’s family, most of whom were living in Oregon. Ernest and Elva were married 14 August 1917 by her father.

Elva was associated with peace activism of her father. In his 1937 book War Peace Amity, she had a chapter "Women and Peace" which described and praised non-Mennonite women's rights and women's peace movements in the broader society.

As Elva traveled with her husband she wrote travelogues which were published in the Review. In 1961, she translated and worked to publish the autobiography of her grandfather, Christian Krehbiel, Prairie Pioneer. She also wrote her 523-page autobiography, "Remembering," as yet unpublished in 2019. She also collected family history materials avidly.

Elva was president of the Parent Teacher Association, the SMU Women's Club, the SMU Mothers' Club and the Senesa Club. She was chairman of the junior high Sunday school for 30 years and later taught Bible class until she was 82. She was also active in the Dallas Council on World Affairs, Book and Drama Group, American Association of University Women, Women's Missionary Society and Craig Class.

She and her husband were honored with the Alumni Award from Bethel College in 1965.

Three children were born to the couple -- Melvern K. Leisy, who was killed in an airplane crash in California in 1965; James Leisy, chairman of the board of Wadsworth Publishing company, former member of the board of directors of Bethel College and also the President's Council of Advisors of Bethel College; and Margaret L. Steineger, wife of Kansas State Senator Jack Steineger and a member of the Kansas Arts commission.

A memorial chair in the English department was established at Bethel College in the names of Dr. and Mrs. Leisy.

The Leisys are an early example of a US Mennonite couple who spent much of their careers outside Mennonite circles but still maintained active Mennonite connections.

Warkentin, A. and Melvin Gingerich, compilers. Who's who among the Mennonites. North Newton, KS: Bethel College, 1943: 157.