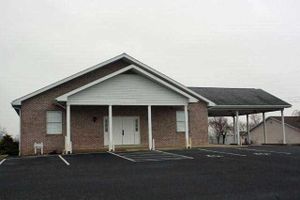 Lebanon Valley Mennonite Church, located north of Myerstown, Pennsylvania, USA, was the fourth congregation to join Mid-Atlantic Mennonite Fellowship (MAMF). The congregation was begun by a number of families from the Eastern Pennsylvania Mennonite (EPMC) churches in the Lebanon and Berks County area who preferred Mid-Atlantic leadership. The first Sunday service was held 21 October 1979 with approximately 60 people attending. The members voted on several suggestions for a name for the new congregation and chose the name of Lebanon Valley.

The Jacob Dundore Meetinghouse (United Brethren in Christ Church) was located along Route 897, two miles (3.2 km) east of Lebanon, Pennsylvania, in the village of Iona. The vacant little red-brick one-room church building (with no basement) was rented as a temporary meeting place for the new congregation. Every Sunday Lester Shirk pulled his camper on site to be used for restrooms, Sunday school rooms, and a nursery. The building was dismantled in 2012 but the adjoining Fairview Cemetery remains to identify the spot where the church once stood.

A building committee was soon formed to consider the options for a larger facility. The congregation continued to meet at the Jacob Dundore Meetinghouse until a new building was constructed on land purchased along Route 501, five miles north of Myerstown. On 8 February 1980, blueprints were finalized for the new building. Over the next several months, the building was erected with Peter Shirk as the general contractor and the help of many volunteers. A dedication service was held on Sunday afternoon, 17 August 1980. The name was retained when the congregation moved from the first location in Lebanon County to the new location just across the line in Berks County.

The Lebanon Valley Christian School was held in the basement of the church for four years until a separate school building was built beside the church in 1984.

As of 1 January 2013 the Lebanon Valley congregation had 115 members. James Musser was bishop, Dale Schnupp and Joel Stauffer were ministers, and Donald Hollinger was deacon. Kevin Hurst was ordained as minister on 16 March 2014 to replace Dale Schnupp who retired.