From GAMEO
Revision as of 19:02, 6 December 2013 by SamSteiner (talk | contribs) (Update MC USA Archives link)
(diff) ← Older revision | Latest revision (diff) | Newer revision → (diff)
Jump to navigation Jump to search
A checked version of this page, approved on 6 December 2013, was based on this revision. 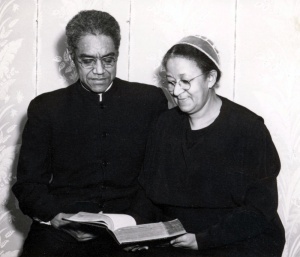 James Lark was born 4 May 1888 in Savannah, Georgia, the only child of Lela and James Lark. Orphaned at six years of age, with the help of relatives and friends he graduated from Quaker Institute for College Youth (which later became Cheney State College) in Pennsylvania in 1916. He taught for a time at Florida Baptist Academy at Jacksonville. He was baptized in a Baptist church at age 16.

James and Rowena were married in 1918. They had six children: James, Juanita, Essie, Rowena, Emma, and Alexander. In 1927 the family moved to a farm near Quakertown, Pennsylvania. There they eventually became members of the Rocky Ridge Mennonite mission. The Larks were invited to surrounding communities to help conduct summer Bible school programs. In the summer of 1944 they were called to lead the summer Bible school program in Chicago. On 18 February 1945, James and Rowena entered full-time service as superintendents of the Mennonite mission work among the African-Americans of the Chicago area. They began a number of activities for children such as a boys' club, girls' chorus, camping program, and summer Bible schools. James was ordained a minister in October 1946. Their Sunday school work led eventually to the establishment of the Dearborn St. Mennonite Church. In 1949 they started a camp near Hopkins Park, Illinois (later called Camp Rehoboth) and the St. Anne Congregation in Rehoboth. Later the Larks engaged in summer Bible school ministries in Saginaw, Michigan; St. Louis; and Los Angeles.

In the mid-1960s the Larks moved to Fresno, California, where they started a church which did not have Mennonite affiliation. They also started a number of programs aimed at strengthening the black community both educationally and economically. After Rowena died in March 1970, James continued with urban church planting. In Wichita, Kansas, he started an ambitious project aimed at presenting a wholistic ministry including day care, nursery, a recreational program, Bible studies, a clinic, and a community garden. He helped revitalize a dying church there (renamed Zion, his last pastorate). He died on 10 January 1978, after a long illness.