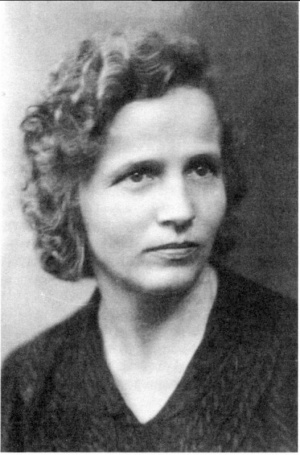 Anna Wiebe Loewen Kran: dedicated mother and immigrant, was born on 13 November 1910 in Kudashevka, Ekaterinoslav, Russia to Jakob and Maria (Thielmann) Wiebe. She and her twin sister, Olga, were the youngest of ten children in the family. Anna was baptized on 2 June 1928 in Russia. On 1 December 1929, she married Nikolai J. Loewen (born 1910) in Friedensfeld, Russia. The couple had three children, Harry, John and Helen.

Anna Wiebe's parental family in Russia had a large estate with large orchards and a steam mill built close to the railway station. Anna’s parents treated their employees well, and the Wiebe household was spared when bandits led by Nestor Makhno terrorized many of the surrounding villages and estates in 1918-1919. Many Mennonites fled from the new Soviet Union in the years after the Russian Revolution of 1917, but Anna’s family stayed, hoping the situation would improve. After she married Nikolai Loewen the couple moved in with his parents, Johann J. and Helene (Friesen) Loewen. They attended the Mennonite Brethren Church in Friedensfeld until it closed around 1930.

The situation in the Soviet Union became worse as the 1920s progressed, and Anna and Nikolai decided to join other Mennonites fleeing in 1929. Before they could reach their destination, however, they were forced to return to Friedensfeld. Nikolai worked there as a veterinary assistant and studied to become a trained veterinarian. He never completed his courses because of the difficult times. Despite these setbacks, Anna and Nikolai made their home a cheerful place, with violin music and singing. That life ended abruptly on 15 September 1937 when the Soviet secret police came and arrested Nikolai, three months after they had taken his father. Several weeks after his arrest, Nikolai Loewen was executed on October 29 in Dnepropetrovsk, just two days after his father, Johann J. Loewen, was shot.

With her husband gone, Anna Loewen helped the family survive by finding employment as a Morse Code operator at the train station in Kudashevka until 1943, surviving amid the upheaval resulting from the Second World War. Anna and her children fled from Russia in 1943, first staying in Litzmannstadt (now Lodz), in German-occupied Poland. At the end of the war in 1945, the family narrowly escaped repatriation to the Soviet Union; Anna and her family were able to immigrate to Canada and settle in Coaldale, Alberta in 1948. She supported herself and her three children, working as a cook first at the Mennonite Brethren Collegiate Institute in Winnipeg and later at the Tabor Home in Abbotsford, British Columbia. In Abbotsford she married John K. Kran (born 1902) on 15 June 1968 . Anna died on 4 March 1988 in Clearbrook, British Columbia.