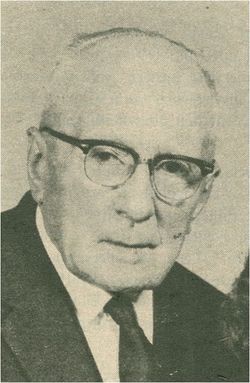 Peter J. Kornelsen: minister and church planter; born 19 June 1881 in Lindental, Slavgorod, Russia, to Johann J. and Anna (Fast) Kornelsen. He was the only surviving child of six children born to his mother and father. On 15 October 1906 he married Maria Konrad (15 November 1876, Lichtenau, Molotschna, South Russia - 6 May 1958, Winnipeg, Manitoba, Canada), the eldest daughter of Johann and Agatha (Kroeker) Konrad, in Tiegenhagen. The couple had two daughters, one of whom died young. His health began to decline in March 1969, and he died on 6 October 1969 in Winnipeg.

Peter grew up as part of a blended family, with children from his parents’ previous marriages. Peter’s mother, Anna (Fast) Wiebe, was a widow with three children when she married Johann Kornelsen. As a child, Peter spent a great deal of time with his mother, whose health problems prevented her from getting out of the house much.

When Peter was eight years old, the family bought land in Tiegenhagen, Molotschna Mennonite Settlement, as well as in Muntau, where they bought a house. When an evangelist Jakob Quiring came to the village and spoke at the schools, Peter was converted, and on 5 May 1903, he was baptized and became a member of the Rückenau Mennonite Brethren (MB) Church. While teaching Sunday school at the church, he met Maria Konrad, eldest daughter of Johann and Agatha Konrad of Tiegenhagen. They became engaged but had to wait to marry until Peter finished his alternative forestry service. The wedding took place on 15 October 1906 in Tiegenhagen.

Peter hoped to serve as a minister after first receiving a year of theological training at the Alliance Bible School in Berlin. After Peter’s graduation in 1909, the family returned home to Tiegenhagen. Peter and Maria had two daughters, one of whom died at a year and four months old while Peter was away from home on a three-and-a-half-year term of service in the Sanitätsdienst. On 19 September 1919, Peter was ordained in Millerowo, and he served in the church until the family’s departure to Canada on 13 July 1924. The family moved first to Morden, Manitoba, and then bought a farm in LaSalle.

In 1925, when farm work became too difficult for Maria due to health problems, Kornelsen and his family moved to Winnipeg, Manitoba. Peter helped establish the South End Mennonite Brethren Church (later known as Portage Avenue MB Church) in 1930, leading it through its move to a new location in 1940. For approximately ten years, from 1936 to 1947, he was a pastor at the South End MB Church; he served in Winnipeg churches for a total of over 20 years. Maria died in 1958, and Peter’s health began to decline in the spring of 1969. He died on 6 October 1969 in Winnipeg, and the funeral was held two days later at the Central MB Church.

Peter J. Kornelsen was a dedicated minister and church planter, devoted to serving his church wherever he lived. Through his commitment, he left a legacy of faithful service for his family and community to follow.