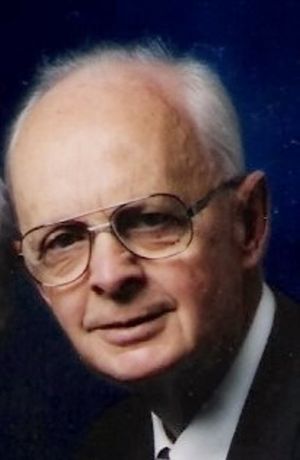 Jacob J. “Jake” Koop: senior official in Canada’s Department of National Defence and Mennonite churchman; was born 18 June 1923 in Petershagen, a village in the Mennonite colony of Molotschna in south Russia (Ukraine) to Jacob J. Koop (29 December 1896-23 January 1958) and Sarah (Dueck) Koop (19 October 1900-26 August 1993) Koop. He was oldest of five children. His father was a teacher. In 1924 the young family joined the large migration to Canada. After one year in Ontario they moved to Manitoba where his father took the necessary training to resume his teaching career. By the early 1930s two more boys and two girls had been added to the family. In 1948 Jake married Elsa Pauls (1924 -) and they too had five children: Valerie, Gerald (1952-2007), Robert, Barbara and Richard. Jake died on 2 July 2009 and is buried in Ottawa’s Capital Memorial Gardens.

Jake completed high school at the Mennonite Educational Institute in Gretna, Manitoba, and started work as a teacher but, this being the time of World War II, he received his call to military service in May 1943. He had already decided, given the horrific Mennonite experience in post-revolutionary Russia, that self-defense was legitimate and that he could not, in good conscience, claim to be a conscientious objector. So he joined the army. But then an opportunity for a year of university that was to lead toward becoming an officer kept him from being sent overseas until 1945. By the time he was deployed to continental Europe, German forces were in retreat so Jake, to his relief, never had to engage in actual combat.

Upon his return to Canada Jake resumed his university studies, focusing on chemistry. While working on his PhD thesis at Montreal’s McGill University, he received a job offer from the Defence Research Board in Ottawa. For most of the next 35 years he worked in the area of science and defence, contributing substantially to various arms limitation efforts.

In the 1950s when the United States and the Soviet Union were testing nuclear weapons in the atmosphere Jake coordinated a program that involved a fleet of airplanes equipped with special filters to monitor the atmosphere for nuclear debris. On this basis he contributed background papers to support the negotiations that led, in 1963, to the treaty banning all atmospheric nuclear testing.

As efforts got underway to also ban nuclear testing underground and in space, Jake helped to produce a seismological system for detecting underground tests even if they occurred thousands of miles away. Jake also drafted recommendations for the extensive monitoring required by the Nuclear Non-Proliferation Treaty adopted in 1968.

Jake contributed substantially to the defence department’s discussions about cold-war deterrence policies, space based defence systems, and possible security issues arising from global food shortages and population growth. From 1959 to 1962 Jake was posted at the Canadian Embassy in Washington to work as a liaison between the Canadian and U.S. defense research communities. For the year 1967-68 he was a “Fellow” at Harvard University where he, among other things, studied with Henry Kissinger. From 1977 to 1980, in a career highlight, he was the the Science Counsellor at the Canadian High Commission in London, United Kingdom.

Jake saw himself as strongly pro-peace but on the basis of "just war" principles. On this basis he was sharply critical of the Allied "saturation bombing" of Germany near the end of WWII and their insistence on Germany’s unconditional surrender when a negotiated peace could have been achieved much sooner. He regretted that the Mennonite stance on peace seemed not to acknowledge the work that he and his colleagues did from inside the defence department.

Alongside his demanding career Jake was very active in the Ottawa Mennonite Church, serving as deacon, congregational chairperson and in other capacities. One year when the church was without a minister, he preached the sermons up to twice a month. Often they reflected his desire to reconcile his work with his faith. At his funeral, Rev. Don Friesen referred to him as ‘a gentle soldier.’ Almost certainly no other person active in a Mennonite church has worked at such high levels in their country’s defence department.