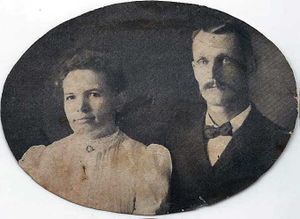 Mathilda (Mathilde) Kohm: deaconess and missionary to Africa, was born 16 June 1871 in Itzelberg, Wurttemberg, Germany to Johannes and Ottilla (Merz) Kohm. Her parents were of the Lutheran faith and Mathilda was baptized on 20 June 1871 at the Evangelische Kirche Konigsbronn at Itzleberg. In 1888 most of the family immigrated to the United States and settled in New York City.

Her sisters coaxed Mathilde to attend the First Methodist Church where she had a conversion experience. She soon came in contact with the deaconesses of the Light and Hope Missionary Association and was convinced to become part of that organization. She was a member of the first class of deaconesses who were trained in Berne, Indiana, in 1892, where the Light and Hope Society began under the direction of Rev. and Mrs. J. A. Sprunger. This class of nine deaconesses went to Chicago, Illinois and Detroit, Michigan to do service for Christ in hospitals.

In 1896 Mathilde Kohm became the first overseas missionary sent from the Evangelical Mennonite Church, United States, 10 years before the first male missionary of that denomination. She was given support by the Salem Church (an Evangelical Mennonite Church) of Gridley, Illinois, going as the first missionary supported by that congregation. From 1896 through 1910 she did pioneer evangelistic work in the Belgian Congo (Democratic Republic of Congo) under the auspices of the Christian and Missionary Alliance. This period included four years of teamwork with Alma Doering, marriage to a missionary widower Alvin Stevenson (1904), the birth of four children and the burial of one, and the deaths of two close missionary colleagues.

From 1910 through 1912 she and her husband, who joined her church, were influential in the founding of the Mennonite mission board later known as Africa Inter-Mennonite Mission (Congo Inland Mission). She stayed with her children in Illinois while Alvin Stevenson went back to the Congo in 1912 to identify a field of work for the new agency. He died there in February 1913.

After Alvin's death, Mathilda raised the children and worked in various fields of Christian work including time at the Salem Children’s Home near Gridley, Illinois. She was known as one who prayed much and served well in the name of her dear Savior. Mathilda died on 9 April 1949 at the home of her daughter, Anna, in New York City after a life of faithful service to her Lord.