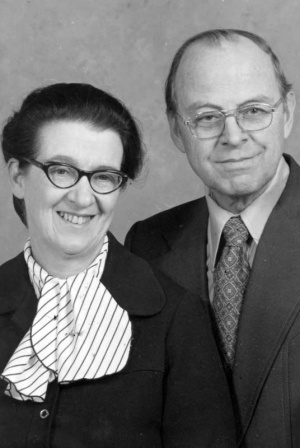 Roy Swartz Koch: minister, bishop and denominational leader, was born 6 September 1913 on a farm close to St. Jacobs, Ontario to Charles Koch (16 March 1878-25 February 1956) and Minerva Swartz Koch (3 August 1880-15 October 1954). He was the seventh of ten children. On 8 August 1942 he married Martha Horst (5 October 1921- ), a young woman who was a member of a Mennonite farming family in the St. Jacobs area. They became parents of six children. They had 18 grandchildren and seven great-grandchildren at the time of his death on 12 June 2010 in Goshen, Indiana.

Roy attended elementary school in St. Jacobs but didn't have the opportunity to attend high school. Later he attended the four-month session at the Ontario Mennonite Bible School held at First Mennonite Church in Kitchener, Ontario. While still in his teens, Roy felt a call to the ministry. On 4 October 1936, at the age of 23, he was nominated, examined, ordained, and installed as pastor of St. Jacobs Mennonite, his home church, in the space of one hour. Ludwig Koch, recorded as the first minister of the congregation, was Roy's great-grandfather. Roy was ordained as a bishop in 1951.

After his ordination, Roy continued his education for four additional months at the Ontario Mennonite Bible Institute. In the 1940 academic year, he was accepted as a mature student at Waterloo College, in Waterloo, Ontario. The tuition cost was $62.50 per semester. He graduated from Waterloo College in 1944 (then affiliated with the University of Western Ontario), with a BA degree. That led in ensuing years to Bachelor of Theology, Bachelor of Divinity and Master of Divinity degrees from Goshen Biblical Seminary. Martha studied in the Bible Department at Goshen College, Goshen, Indiana during this time.

Roy served at St. Jacobs for 21 years. He was very involved with Summer Bible School during those years. During his tenure, the congregation started to hold a preaching service every Sunday. As financial support from the congregation was limited, he supplemented his income by growing turnips, raising broilers, and working in a local factory.

During the 1940s and 1950s he also taught at Ontario Mennonite Bible School and Institute in Kitchener, and served as its principal from 1952 to 1957. Roy held annual evangelistic meetings at his home church and in other Mennonite churches in southern Ontario.

From 1957 to 1970 Koch was the pastor at South Union Mennonite Church in West Liberty, Ohio. Roy was moderator of the Ohio and Eastern Conference from 1962-1966 and 1969-1971, and moderator of the Mennonite Church General Conference from 1963 to 1965. He served at various times on the Mennonite Church's Board of Missions; Board of Education; and Commission for Christian Education. From 1971-1975 he was conference minister for the Indiana-Michigan Mennonite Conference, followed by service as Bethany Christian High School's development director. He also served several stints as an interim pastor, and edited the ministers' section of Builder magazine. In his later years he graded Bible study courses for prison inmates for the Gospel Echoes Team in Goshen.

In addition to her studies at Goshen College, Martha Koch took secretarial training. In the 1970s she worked as Office Secretary for the Indiana-Michigan Mennonite Conference, and later at the Provident Bookstore located in Goshen.

At age 96, Roy died at his home in Goshen on 12 June 2010. He and Martha had been married for nearly 68 years. Roy was buried at the Violett Cemetery in Goshen. In 2012 Martha resided in Goshen.