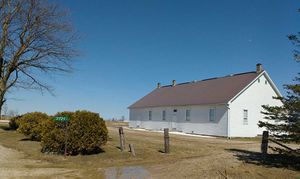 The Klearview Old Order Mennonite meetinghouse is located in Perth County, at 7721 Road 129, concession 12 pt. Lot 10 AS, RR 4, Listowel, Ontario (about 12 km east of Listowel and 12 km northwest of Millbank).

Old Order Mennonites first purchased farms in Perth County, west of Waterloo County, in the 1970s. The Klear View meetinghouse was built in 1990, paid for by a personal donation of profits generated through the sale of the Waterloo Old Order shed. At that time, approximately 30 families lived in the Kleaview district. The meetinghouse was originally called Clear View, and the name was later changed to the present spelling in order to distinguish it from the Cedarview meetinghouse near Mount Forest.

The first ordinations at Klearview were held in 1991, when Mervin R. Sauder was ordained as Minister and James M. Bauman was ordained as Deacon. As is the practice in Old Order churches, they were ordained by lot from within the congregation. Ordained persons are not paid for their church service.

In the 1990s six families moved to the Kinloss settlement north of Lucknow, Ontario to join a more conservative settlement that did not permit phones or electricity in the homes, and continued to only use horses in farming.

In 2004 there were approximately 70 families in the district. An accurate count of members is not always available because Old Order Mennonites think of themselves as members of the church at large and not just the immediate congregation. The Old Order also do not see the quantity of members as indicative of the congregation's importance.  When people move from one geographical area to another, they automatically "belong to" the congregation whose meetinghouse is closest to their home. No membership transfer takes place from the former location.