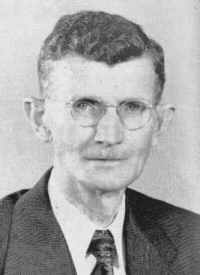 Peter J. Klassen: a General Conference Mennonite Church (GCM) minister and an outstanding Mennonite poet and literary artist. He was born at Ohrloff, Molotschna, Russia on 7 June 1889 and attended secondary school at Spat, Crimea, where he later taught. On 3 January 1910, he married Liese Löwen and entered business. During 1916-24 he was again a teacher, but he also made numerous trips to Moscow to represent the Mennonite constituency. He was active as a youth leader and choir director. On 3 July 1923, he was elected minister of the Ebenfeld Mennonite Church and was ordained by P. Wiens. After teaching a year at Arkadak he immigrated to Canada in 1925 and lived for a while in Rosthern and Saskatoon, Saskatchewan. In 1928 he purchased a farm at Superb, Saskatchewan, and stayed there until 1948, when he moved to Yarrow, British Columbia, where he spent the last years of his life. He died at Chilliwack on 19 July 1953.

Peter J. Klassen, although struggling with sickness and want nearly all of his life, was an outstanding writer. J. H. Janzen said of him, "He is the one who is most widely known in German literature and is the only [Mennonite] poet who has received high honors and an income for his literary work." In 1951 the Canadian Mennonite Conference published 5,000 copies of his Verlorene Söhne because of its significance in promoting the Mennonite peace principles. Many of his stories appeared in installments in Der Bote. He was also a constant contributor to Der Kinderbote for the column "Onkel Peters Ecke."