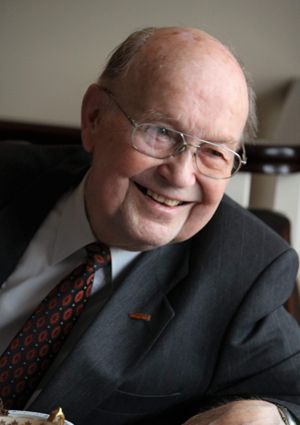 During the Soviet era, John’s father was a farmer, and after collectivization, worked as a carpenter; John’s mother milked cows on a collective farm. Arbitrary killings were common. John’s father was arrested on the night of 10 September 1937 and never heard from again. Only after 1990 did the Klassen family learn that their husband/father had been summarily executed by the NKVD (People’s Commissariat for Internal Affairs) two weeks after his arrest. John’s early education was often interrupted. In 1937 he began his schooling in Steinfeld. For the following seven years, schooling was ideologically controlled, first by the Soviets and later by the invading German army. In 1943 the Klassens were able to flee the Soviet Union through an almost three-year treacherous journey through Poland, and settled in Germany until 1948. While in Germany, John experienced spiritual birth at a youth camp in Braunschweig, where he was baptized on 10 December 1946.

On 14 February 1948, the Klassens arrived in Canada. From 1949 to 1953, John was enrolled in the Winkler (Mennonite Brethren) Bible School. After his marriage to Mary in 1953, he studied at the Mennonite Brethren Bible College in Winnipeg, Manitoba.

A life-long learner, John intermittently continued his formal studies. From 1966 to 1968 he was a student at Fresno Pacific University and the Mennonite Brethren Biblical Seminary in Fresno, California, earning his BA, BD and MA degrees. He also took courses at Fresno State University. In 1982 John enrolled at the Fuller Theological Seminary in Pasadena, California, where he completed his ThM. With the submission of his dissertation at the University of South Africa (UNISA) in 2003, John received his PhD, having completed an exhaustive study of Russian-German Free Churches in Germany.

In 1960, John and Mary were invited by the Board of Missions and Services of the North American Mennonite Brethren Conference to ministry in Germany. On 23 August 1960, the Klassens began their work as pastors at the Mennonite Brethren Church in Neustadt an der Weinstrasse, where they served for the next six years in teaching, preaching, evangelism and directing youth camps. In 1969, the Klassens were asked to assume the leadership of the Lage/Lippe MB Church, with a membership of seventy. This congregation, prominently comprised of recent refugees (locally known as Umsiedler) to Germany, became a fertile place of ministry. By 1982 its membership had grown to three hundred.

In 1985, the well-established MB Church in Bielefeld decided to birth a daughter congregation, for which John and Mary assumed the leadership. This church also experienced rapid growth. With the appointment of Alexander Neufeld as lead pastor in 1987, John’s assignment in Germany changed from a pastoral to a teaching role. In 1987 he was appointed as Rektor of the Freie Hochschule für Mission in Korntal, which had been founded by G. W. Peters.

One more assignment, perhaps the most challenging yet, awaited the Klassens. In 1991, as a result of an invitation from leaders of several German Mennonite churches, John agreed to participate in the establishment of the Bibelseminar Bonn, a graduate Bible school, located in Bornheim, some eighteen kilometers south of Bonn. John flourished in this milieu, and remained here until the Klassens returned to Canada in 2008.

During the next decade, John continued an active life researching and publishing his findings, and participating in numerous academic and church conferences. He passed away on 4 August 2020 in Abbotsford, British Columbia.

John and Mary spent their ministry years in Germany, providing spiritual nurture for post-war Mennonites, many of them having emigrated from the Soviet Union.

His records and mission-related correspondence are housed at the Centre for MB Studies in Winnipeg, Manitoba: https://cmbs.mennonitebrethren.ca/personal_papers/klassen-john-n-1929-and-mary-1928/.