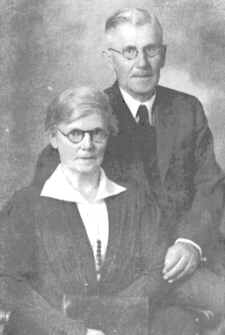 Johann was baptized on 25 May 1892 in the village of Chortitza, Chortitza Mennonite Settlement. He attended the Chortitza Zentralschule and completed the pedagogical course. For a year he taught in the elementary school at Chortitza, only to leave as the first student from Chortitza to study at the Theological Seminary at Basel, Switzerland. This was made possible through the scholarship founded by a Mennonite industrialist. After studying there for five years he returned to the Chortitza settlement and taught for several years in the villages of Kronsgarten and Schönhorst. In Schönhorst he was elected to the ministry in 1902. In 1905 he was called to teach in the Chortitza Zentralschule. After a few years he went to Ekaterinoslav, where he took over duties as teacher and minister from 1912 until 1918, replacing the well-known minister and editor of the Botschafter, David H. Epp, who had moved with his paper to Berdyansk. Klassen then returned to Chortitza, and as a minister in the congregation and teacher in the Zentralschule, he shared with his people the first severe postwar year with its anarchy, robberies, typhus, and hunger.

Klassen and his family immigrated to Canada in 1923 and settled in Dundurn, Saskatchewan. Johann helped to gather the scattered groups in Saskatchewan into a congregation. The Nordheimer Mennonite Church had its main station at Dundurn, about 30 miles away from Saskatoon, and was the first organized church of the Russian immigrants. It also had congregations other nearby communities including Hanley and Pleasant Point. Klassen was the first of these new Canadian Mennonites to be ordained as an elder in 1925 by Elder David Toews. He served as elder until 1940 when he moved to Sardis, British Columbia to serve the First Mennonite Church Greendale congregation.

With his unwavering faith and his calm unbiased judgment Klassen had a deeply spiritual disposition. He was often called to address the conference on difficult topics, and left a permanent influence on the Mennonite congregations that he was involved with, both in old country Russia and in Canada.