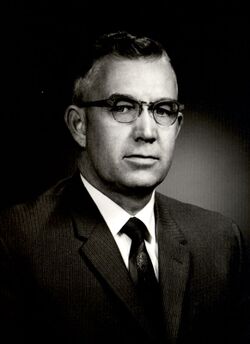 In September 1926 Jake moved to Canada with his parents and siblings, settling near Watrous, Saskatchewan. He was baptized on 19 August 1934 at Philadelphia Mennonite Brethren Church, Watrous by Peter Janzen. As a young man Jake pursued his high school education by correspondence while grain farming in Watrous. He also attended Bible school for five years during this time--two years at Tabor Bible School in Dalmeny, Saskatchewan, two years at Bethany Bible Institute, and a final year at Winkler Bible Institute. Jake and Helen were married in Gretna, Manitoba on 13 September 1941. They returned to the Watrous area to farm before moving to Chilliwack, British Columbia in 1945.

While engaged in mixed farming in Chilliwack, Jake along with a number of other Mennonites became a founding member of the East Chilliwack Fruit Growers Cooperative Association (later East Chilliwack Agricultural Co-op) in 1947 and was its general manager from 1947 to 1957. Although the cooperative began as a raspberry packing plant and marketing agency, it expanded within a few years to include livestock and poultry feed manufacturing and distribution, and gradually became the major feed supplier in the Fraser Valley and a primary employer in Chilliwack.

In 1953, while still serving as general manager of the East Chilliwack Co-op, Jake Klassen became sales manager for the Abbotsford Growers Co-op, a position that he held until 1972. During this time the Abbotsford Growers Co-op became the largest processor of raspberries in Canada. In 1958 the Klassens moved to Abbotsford and in 1959 Jake was one of the founding members of the Tabor Home Society in Abbotsford, a Mennonite senior citizens facility and served as board chairman 1959-1966. The Tabor Home residence began with 39 units and grew to 120 intermediate care units. Jake was chairman of the Mennonite Educational Institute (1961-67) and a board member of the Clearbrook District Mennonite Savings Credit Union (later merged with East Chilliwack Credit Union to form First Heritage Savings Credit Union; now Envision Credit Union, Canada's fourth largest credit union as of 2001).

Frequent travel, often with Helen, became part of Jake's administrative activity. By nature Jake seemed to portray a rather conservative attitude, and his daughters sometimes chided him for being a "stoic." However, for Jake nothing surpassed a good round on the greens, golfing with his friends.