From GAMEO
Revision as of 05:07, 12 June 2020 by RichardThiessen (talk | contribs) (Created article.)
(diff) ← Older revision | Latest revision (diff) | Newer revision → (diff)
Jump to navigation Jump to search
A checked version of this page, approved on 12 June 2020, was based on this revision. 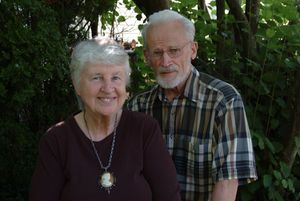 Herb and Maureen Klassen: teachers, writers; Herbert was born 1 March 1929 in Winnipeg, Manitoba, Canada to Cornelius Franz "C.F." and Mary (Brieger) Klassen. He had two older brothers, Harold and Walfried, and was later joined by twin sisters, Irmgard and Justina. Maureen was born 25 January 1937 in Potters Bar, England, to Percy and Pearl (Veitch) Harvey. She had one older sister, Margaret. Herb and Maureen were married 30 August 1959 in Chicago, Illinois, USA. Soon after their marriage, they moved to England, where they had their first three children: Tanya (1960), Matthew (1962), and Steve (1964). In 1965, the family of five moved to Abbotsford, British Columbia, Canada, where two more children were born: Mark (1967) and Becky (1970). Herb died 28 December 2018 in Abbotsford, and Maureen died 8 March, 2019 in Vancouver, British Columbia (BC).

Maureen was baptized as a six-month-old child at Regent Square Presbyterian Church in central London, where her family attended. In 1951, when she was fourteen years old, Maureen attended an evangelistic campaign in London called "For Such a Time as This" and it was there that she accepted the Lord and joined the church. After attending Enfield School for Girls, Maureen went on to study at Royal Holloway College, University of London (BA in English), and then Goshen Biblical Seminary in Goshen, Indiana. As part of her faith journey as an Anabaptist, Maureen was re-baptized in the River Severn just outside Gloucester, England on Easter Saturday 1965.

Herb became a history professor at Trinity Junior College (later Trinity Western University), and later served for twelve years as a Prison Chaplain at Matsqui Institution. Maureen taught English at the Mennonite Educational Institute and at Columbia Bible College and was involved in the leadership of Aglow, an interdenominational women’s ministry. Herb’s work at the prison also led to a vibrant ministry that provided refuge for ex-inmates and various people in need, which was based at the Bread of Life community farm in Abbotsford, where the Klassen family lived for many years.

In 1988, after their children had grown up, Herb and Maureen attended a Crossroads Discipleship Training School with Youth With A Mission in Richmond, Virginia. Following that, they served for five years with Mennonite Central Committee in Moscow, Russia, and then for another year with the Mennonite Center in Molochansk, Ukraine.

Upon returning to Canada, Herb and Maureen served for ten years as the Executive Secretaries of Logos Canada. During this time, they sold their property in Abbotsford and bought a house on Pender Island, BC, where they lived for several months of the year, splitting time between there and their basement suite in the home of their daughter Becky and her family in Abbotsford.

Herb and Maureen co-authored two books: Ambassador to His People: CF Klassen and the Russian Mennonite Refugees (1990) and The Story of Logos Canada: Celebrating Twenty-Five Years of Ministry in the Former Soviet Union (2014). Maureen also wrote a book called It Happened in Moscow: A Memoir of Discovery (2013), which was a closer look at the life of her mother-in-law, Mary (Brieger) Klassen. In 2016, Herb completed a book, which was a culmination of a lifetime of devotion and study entitled, Obedient Love: Engaging the Commands of Jesus in the Gospels.

Throughout their lives, both Herb and Maureen often expressed their desire to be "humble learners in the school of Christ." The couple will be remembered for their deep spirituality, their love of Scripture, their sensitivity to the Holy Spirit, their love of the Church (yet discomfort with religious structures), their unrestrained love for family, their appreciation of a simple lifestyle (and disdain for consumerism), their sincere love of people, especially the marginalized, and their unwavering devotion to teatime.