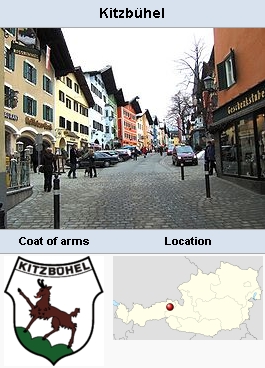 Kitzbühel (population 8,574 in 2001; 2,000 in 1955; coordinates: 47° 26′ 47″ N, 12° 23′ 31″ E) is a town in Tyrol, Austria. Few places in Tyrol had as many Anabaptists as Kitzbühel, in the archbishopric of Salzburg. To be sure, the Tyrolean government had on 28 November 1527, demanded that the archbishop assist in eliminating the sect, and had issued orders to the subordinate authorities to that effect; but these public servants lacked either the interest or the power to halt the movement. Instead, refugee Anabaptists from Salzburg and other parts of Tyrol met here.

A number of them were seized in March 1528; by April 200 had been arrested. Many were dismissed when they recanted; but 110 refused to do so. An order of 2 April 1528 promised pardon to all but the preachers and those who had talked about Christian liberty, community of goods, or against the sacraments; the houses where they met and observed communion should be burned and torn down, unless it involved innocent persons.

At the same time strict orders were sent out to catch "the priest" Paul, who was preaching in the community, and his disciple, Hans Rott, who was preaching in the mountains of Reutte and in the castle of Helene von Freiberg at Münichau. Proceedings were started against this lady, and on 5 May 1528, 106 persons "spotted with Anabaptism" were ordered to appear in the cemetery of Kitzbühel to make a solemn recantation and receive the penance they must pay. Thirty-six were doubtful, and were treated "kindly and painfully"; 13 were easily persuaded, the others only after long torture.

On 9 May 1528 the iron-miner Hans Schwaighofer and Hans Platzer of Aschlberg were tried, and on 12 August executed. While they were on the road to the site of the execution "Thomas Herrmann of Böhmisch-Waidhofen spoke some sharp words," and was himself called before the court and condemned to death. At this trial the jurors said it was hard for them to try such a case, "for they did not know whether the verdict would be accepted by the people." The consequence of this was that the judge was instructed to get jurors from a distance for such cases. This may have been the occasion for the mandate of 5 February 1529, stipulating that the verdict should not be pronounced according to personal opinion, but according to regulations.

Since the burning of Anabaptist houses caused damage to others, a notice was sent to Kitzbühel on 30 April 1529, that henceforth only houses in the country should be burned.

The care of the children of fugitive Anabaptists became a problem. In Kitzbühel alone there were 40 to 50. They were kept in a special home until they were able to take care of themselves.

One such fugitive, who forsook wife, child, and goods, was George Grünwald of Kitzbühel, the author of the song, "Kommt her zu mir, spricht Gottes Sohn," which can be found in many Anabaptist manuscripts (Wackernagel, Kirchenlied III, 128). In September 1529 Grünwald was at Lackstatt in Bavaria, Germany, and was seized there and executed in 1530.

Some of the Anabaptists who had recanted at the cemetery had again joined the group; they were seized with some others who had assembled for worship on the wooded mountain slopes, and dealt with in accordance with the mandates. Many of them had been won by a former chaplain, Jakob Partzner; he himself escaped to Augsburg. Seized there, he was returned to Kitzbühel, and confessed that he had worked as an Anabaptist in Kitzbühel, Rattenberg, and Kufstein, and was now sincerely sorry. He recanted on 29 August 1530, thereby saving his life.

Helene von Freyberg was also involved with Anabaptists; she was considered "at the bottom of the matter, that so many persons had been baptized and put to death." After long hesitation she recanted in 1534. Christina Häring, on the contrary, remained steadfast and was executed in 1533.

In order to instruct those Anabaptists who had been found in and around Kitzbühel in May 1530, the Franciscan monk Tonauer of Schwaz preached missionary sermons for four weeks. Then on 30 July the orders of the government for the discovery and eradication of the Anabaptists throughout the country were announced. These were the days in which Hutter began his extensive work in Tyrol and Moravia. One of the questions the government asked local authorities was: why were suspected preachers allowed to preach so long at some places like Kitzbühel?

On 19 June 1533 the authorities reported to the ruler that the Anabaptists in the Kitzbühel region had been wiped out; but they erred. In autumn of 1533 it was reported that a priest, Paul Kessler, in Kitzbühel was taking a wanton attitude on infant baptism. Of course, the Anabaptists were no longer numerous in Tyrol; but persecution in Moravia drove many Tyrolean Anabaptists back to Austria, and even Hutter's death in 1536 did not end the movement.

On 22 February 1544, the government reported to Brixlegg that the Hutterian Brethren in Moravia were planning to lead the Anabaptists to Moravia the following spring, and that a large number had reported for emigration in Kitzbühel. But the next few years were relatively quiet. In May 1557 a native of Kitzbühel, Hans Kräl, was seized in Taufers and brought to judgment. For two years he lay in a dungeon, until he won his freedom. In 1561 he was again in Kitzbühel, and reported to the brotherhood in Moravia the death of Mändl, Rack, and Kotter. The fear inspired by these executions did not last long.

Soon other Anabaptists from Kitzbühel were taken to court. They reported that Kräl was their leader. He writes, "There is not an hour that we are safe from their bloodthirsty hands. They search and spy day and night, where they might seize us." Hence in the next year it is Hans Kräl and Leonhard Dax on whose capture the authorities were bent. Well-to-do persons from Kitzbühel migrated to Moravia in 1564.

Thus in spite of all the measures passed, the Anabaptist movement in Kitzbühel did not die out. The more freely they were allowed to move in Moravia, the stronger the train of immigrants became. Hans Kräl, having won a reputation for bravery on his bold missionary journeys in the highlands, was chosen leader of the thriving church in Moravia. In 1592 the Anabaptist Georg Pintlechner from the territory of Kitzbühel was reported "unwilling to be corrected of his error. If he remains obstinate, proceed according to the mandates."

In the 1590s the movement continued to grow weaker, nor is there any mention of Anabaptist propaganda in Kitzbühel. The number of those who testified to their faith with their blood in Kitzbühel, according to a manuscript of 1581 found in the metropolitan library in Gran, was 68, certainly a stately number for so small a town.