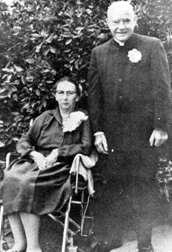 Carl Abram Kauffman: deacon in the Mountain View Mennonite Church near Creston, Montana, was born 29 November 1902 near Garden City, Missouri, and died 18 April 1968 at Phoenix, Arizona. He married Elizabeth Birkey on 27 July 1932. They were the parents of 5 children.

Carl Kauffman attended the Short Bible Term at Goshen College in Indiana in January and February of 1925 and a similar term at Hesston College, Kansas, the following winter. He taught Sunday school classes in both North Dakota and Montana and served as Sunday school Superintendent for several years in the Mountain View Mennonite Church. He was ordained a deacon in that church on 10 January 1943.

The procedure followed in the selection of Carl Kauffman as deacon was somewhat unusual. Members of the church were consulted on Saturday evening and on Sunday morning. Communion services were held in the afternoon, at which time the announcement regarding the ordination service was made. Since there was overwhelming support for Kauffman, he was ordained that Sunday evening.

The Kauffmans accepted a position as cooks at the Western Mennonite School near Salem, Oregon, in 1962, and then, in November of 1964 they moved to Phoenix, Arizona. There they became members of the Paradise Valley Conservative Church but Carl, and later Elizabeth, were buried in the Fairview Mennonite Church near Albany, Oregon.