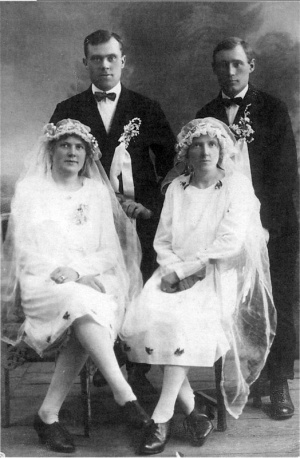 Katharina Enns Kasdorf: dedicated wife and mother, was born 20 February 1901 in Burwalde, Chortitza Colony, Russia, to Cornelius and Helena (Penner) Enns. She was the third of seven children. On 10 May 1930 she married Johann Kasdorf in the [[Burwalde Mennonite Brethren Church (Chortitza Mennonite Settlement, Zaporizhia

Katharina Enns Kasdorf was baptized on 19 June 1920 in the Burwalde Mennonite Church. Her baptism took place in a time of great turmoil, coming in the anarchy following the Russian Revolution of 1917. In spite of the troubles, Katharina managed to maintain a calm outlook on life.

Katharina Enns witnessed first-hand the terrors of the Revolution’s aftermath, often hiding in the bushes to escape bandits. Her father worried that a single woman living alone could be a target for the marauders, and she finally got married in 1930 at 29 years old. She and her husband, Johann Kasdorf, escaped transport to Siberia when farms were being confiscated and many families displaced. The couple moved to Rosengart in the Choritza Colony, and their first child, Hans, was born in 1931. Their second child, Jacob, was born in 1933 but soon died of dehydration. Daughter Tina followed in 1936 and another son, Jacob, in 1938. He died the next year, but a fifth child, Gerhard, was born in 1941.

Caring for her family took a great deal of energy. Katharina grew produce and sewed clothing to support the family while she and Johann did mandatory unpaid work for the government. In 1941, while Johann was away on a cattle drive, she and her children were forced out of their home and loaded on wagons bound for the Andreafska Region, with Siberia as the ultimate destination. German officials intervened at Katharina’s insistence, and she and her children were allowed to return home to Johann.

In 1943 the family left for Germany by boxcar, arriving in Roschlitz, where Johann became an interpreter for the German army. He was arrested by the Communists in 1945 and was sent to a Prisoner of War camp in Siberia. At the end of World War II, Roschlitz came under Communist control and the fatherless family was threatened with transport to Leipzig. Katharina and her children managed to avoid deportation and soon moved to Konigsfeld. Soon the determined mother managed to bribe border officials to allow the family into West Germany, where the family lived at the Mennonitische Altersheim Burgweintig, a home for immigrant families. Through one of the managers there, Katharina regained contact with Johann, sending letters back and forth.

Katharina Kasdorf and her family stayed in Germany for only a few years. With the help of her brother, Martin Enns, she moved to Steinbach, Manitoba in October 1948. Although her income was low, she committed herself to sending care packages to her husband and relatives in the Soviet Union, a practice she continued for many years. Life without her husband was difficult, but she never gave up hope that the family would be reunited. Finally, her hopes were fulfilled when Johann gained permission to leave the Soviet Union in the fall of 1964. He joined his family in Canada where he died 25 April 1971.

The determination that had carried Katharina Enns Kasdorf so long kept her going in the years that followed. Her final struggle was with Alzheimer’s disease, and she died at the age of 95. Throughout her difficult life, she maintained a deep faith in God that carried her through joys and sorrows.