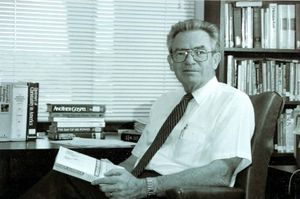 Hans Kasdorf: missionary and missions scholar, was born 27 July 1928, in the village of Alexandrovka, in the Altai region of Siberia, close to the city of Slavgorod. He was the youngest of nine children born to Heinrich Kasdorf (29 February 1880-3 October 1968) and Susanna Kroeker Kasdorf (14 February 1886-8 September 1955). On 20 September 1953 he married Frieda Reimer, whom he had met at Winkler Bible School in Manitoba, Canada. They had two daughters, Dianne and Evelyn, and one son, David. Hans Kasdorf died in Fresno, California, USA on 26 March 2011. He is buried at the Clovis Cemetery.

As part of a Mennonite refugee family, Hans followed a path from Siberia through Moscow and north Germany, ending up in Santa Catarina, Brazil in 1929. He spent his childhood in the small German settlement of Waldheim, located in the Krauel mountains. The complicated circumstances of that journey—combined with the challenges of World War II and the difficulties of building a life in his new homeland—were not conducive to a standard education. Although he attended school, he did not own a book until he was 18 years old. Nonetheless, from the time that he began formal biblical and theological studies in Canada at the age of 21 until the end of his life, he was always learning and teaching. At the age of 18, Hans was baptized and joined the Mennonite Brethren church in Waldheim, Brazil.

In 1949, Hans attended Winkler Bible School, followed by Mennonite Brethren Bible College in Winnipeg. After a year of teaching at East Chilliwack MB Bible School (British Columbia) in 1956-57, Hans and Frieda moved to Brazil to pastor the Blumenau Mennonite Brethren Church. In 1962, the family returned to North America where Hans studied at Tabor College, Hillsboro, Kansas and the University of Oregon. In 1968 the family moved to Fresno, California, where he taught at Pacific College and enrolled at Mennonite Brethren Biblical Seminary (MBBS) and Fuller Theological Seminary, to earn a doctorate in missiology in 1976.

His DMiss dissertation at Fuller Theological Seminary focused on Gustav Warneck, the founder of German mission theology. A later PhD dissertation at the University of South Africa in 1984 explored a century of Mennonite Brethren missionary activity.

Kasdorf was a "servant leader." Following many years of teaching at Fresno Pacific College (1968-1978), he taught mission studies at the Mennonite Brethren seminary in Fresno from 1978 to 1993. From 1994 to 1998 he developed the mission studies department at the Freie Theologische Hochschule at Giessen, Germany.

Hans Kasdorf had a global perspective. He was a welcome speaker at universities and colleges, seminaries and Bible schools. He accepted numerous invitations and served in teaching assignments in Brazil, the United States, Paraguay, Germany, Austria, Canada, Scotland, Kenya, South Africa, Romania, Hungary, and countries in the former Soviet Union. He was fluent in German, English, Portuguese, and Spanish. Beyond that, his knowledge of Greek and Hebrew, Danish, Dutch, French, Italian, and Russian enabled him to pursue his studies even more deeply.

Kasdorf loved the church of Jesus Christ. For him, denominational boundaries were irrelevant. In every country and every city in which he traveled, Kasdorf nurtured contacts with people in the church—with Anabaptists and Lutherans, Mennonites and Reformed, Puritans and Pietists. He loved all those who loved Jesus. He influenced others not by provoking but by persuasion, always nurturing points of commonality rather than differences. He built bridges across divisions inherited from the past. He often said: without the church there is no mission; and without mission there is no church.

Kasdorf was well read, and an early riser. It was not uncommon for him to have read several hundred pages on any given day before his own lectures at the seminary. He could remember especially important passages with remarkable precision; indeed, even days later he could not only repeat a quote almost word-for-word but could also cite title and page number. Yet of all the books he read, he devoted his greatest attention to the Bible. In his autobiography he lamented his limited understanding of the biblical languages and noted, drawing on the counsel of the Pietist Johann Albrecht Bengel (1687-1752), that he always strived to be fully immersed in the Word of God, and fully imbued, informed, and purified by it.

Kasdorf, Hans. The Design of my Journey: an Autobiography. Fresno, Calif.: Kindred Productions, 2004.

Books by and about Hans Kasdorf