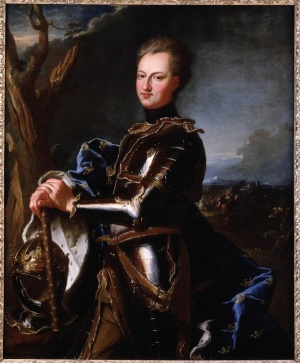 For most of his reign, Karl XII was involved in several wars in an attempt to create a Swedish empire.  In 1700 Denmark, Poland and Russia united in alliance against Sweden.  Sweden defeated Denmark in 1700, ruled by his cousin Frederik IV, and then entered into a war against Poland, ruled by another cousin, the Saxon  Augustus II, and against Russia, ruled by Peter the Great.  Karl defeated Poland, but was eventually defeated by Russia, marking the end of the Swedish empire.

For his encounter with Stephan Funk, a Mennonite preacher, see Funk, Stephan.