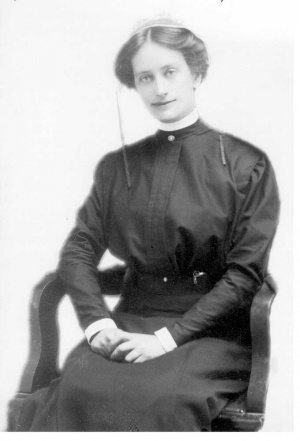 Margaret Elizabeth Brown (always known as Elizabeth): urban missionary and congregational leader, was born 13 August 1883 in Markham Township north of Toronto, Ontario to David Brown (1 July 1845-4 March 1928) and Anna (Reesor) Brown (10 April 1846-30 November 1917). Anna, from a Mennonite family, and David were married by a Baptist minister; they did not join a Mennonite church until 1919. Elizabeth was the second child and only daughter in a family of three children. She died 27 August 1952 and is buried with her husband at the Wanner Mennonite Church.

Elizabeth became a Christian at age 17. While attending Toronto Bible School (now Tyndale University College and Seminary) along with Mennonite young women, she boarded and helped out at the Mennonite mission. In spring 1910 she began serving at the mission full time, teaching Sunday school, sewing classes, and led girls' clubs. Still in her 20s, it is reported that she played a significant role in designing the three-storey brick house on Gledhill Avenue which became the Toronto mission house and center of activity for the next 50 years. In January 1914, after John Byler's resignation as superintendent, other women workers at the mission were instructed to relieve Elizabeth of domestic chores so she could do the work of managing the mission--except for preaching. Although she was asked "to take charge" without a title, the name M. E. Brown, superintendent, appears in the minutes of a 20 January 1915 meeting in a list of mostly male mission board officers in attendance.

That year, Simon Menno (S. M.) Kanagy came from Pennsylvania to do pastoral work at the Mennonite mission and to teach music at Toronto Bible College. In April 1915, he was appointed superintendent. Elizabeth and Simon were married on 29 June 1916. They moved to Hesston (Kansas) College in 1920 where Simon taught music and Elizabeth served as matron in the dormitory while continuing her education. Three years later they accepted an assignment at the Mennonite Home Mission in Chicago where they directed the first Vacation Bible School and Elizabeth developed girls' programs. 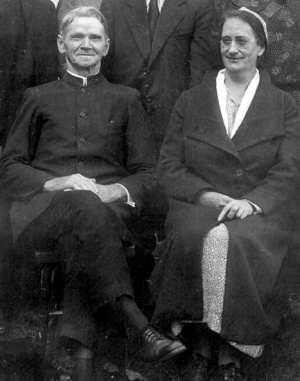 The black smoke that hung over Chicago caused Elizabeth ongoing lung infections. In 1932, a call from the rural Wanner congregation near Hespeler (Cambridge), Ontario, which needed a pastor, was a perfect solution. The couple first lived in a cottage by Lake Erie, commuting to Wanner, and in the fall moved to nearby Blair. Elizabeth became a teacher and mentor for girls and women in the congregation and the community, developed children's clubs and, along with Simon, directed Wanner's first Vacation Bible School in 1933. She led inspiring devotions at bi-weekly gatherings of young adult women whose work as domestics in area homes prevented them from attending regular Sunday worship services.

“We have had many Marthas ... but fewer women such as Elizabeth whose gracious personality, warmth of character and wealth of experience were such a source of strength to others,” wrote Wanner's Edna (Hunsperger) Bowman for a Women's Mission and Service Commission publication in 1983.