From GAMEO
Revision as of 23:14, 20 October 2019 by RichardThiessen (talk | contribs) (Added categories.)
(diff) ← Older revision | Latest revision (diff) | Newer revision → (diff)
Jump to navigation Jump to search
A checked version of this page, approved on 20 October 2019, was based on this revision. 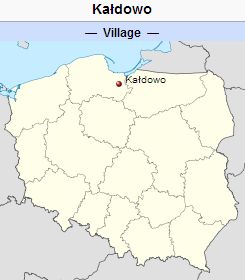 Kalthof is located on the western bank of Nogat River. At the end of the 18th century, Kalthof had  17 houses. The village was divided into Kałdowo village and town. Until 1772 Kalthof was located in what was known as Royal Prussia (also known as Polish Prussia) in the Kingdom of Poland. The First Partition of Poland in 1772 resulted in the creation of a new province in 1773, called West Prussia, in which Kalthof was located. Kalthof was situated in the district (Kreis) of Marienburg until the establishment of the Free City of Danzig in 1920. The village came under the control of Nazi Germany during World War II until February 1945, when it was occupied by Soviet forces and returned to Poland. In 2012 Kalthof (now Kałdowo) was a village in the administrative district of Gmina Malbork, within Malbork County, Pomeranian Voivodeship.

The 1776 Prussian census lists 18 Mennonite families in Kalthof with the following surnames: Claasen, Conrad, Cornelius, Dickgres, Ens, Epp, Fast, Loewen, Penner, Reimer, Sudermann, Toews, Wieler, and Wiens. In 1820, there were 29 Mennonites among the 215 residents of Kaldhof, while among 224 town residents, 34 were Mennonites. In the second half of the 19th century, the village had 35 houses, 422 Catholics and Lutherans, and 25 Mennonites.

Mennonites who were residents of Kalthof were members of the Heubuden Mennonite Church.