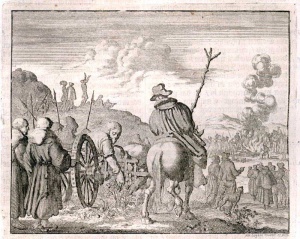 Leonhard Kaiser (Kaser, Keser, Kayser, Keyser), a Lutheran martyr, a former chaplain, was burned at Scharding on the Inn on 16 August 1527, because he would not recant. The trial and execution caused much excitement in Germany. Reports concerning his death grew in the manner of legends. The publication of the execution was very painful to Johann Eck, who had participated as prosecutor in the trial at the orders of Bishop Ernest of Passau (a younger brother of dukes William and Louis of Bavaria). He therefore replied in his booklet, Warhafftige handlung, wie es mit her Lenhart Käser zu Schärding verbrandt, ergangen ist. Luther published a counter-reply.

In the older accounts Leonhard Kaiser is called an Anabaptist martyr. But this was an error. The steadfastness of the martyr made a deep impression on the bystanders. The judge who pronounced the death sentence was so moved that he soon resigned his position. His assistant, Leonhard Mittermaier, immigrated to Moravia and joined the Hutterian Brethren. The Hutterite chronicle states that he reported the execution to them and apparently took Kaiser to be an Anabaptist. It is very likely that he did not know the difference, since the charge was presented in Latin, and Kaiser answered in German; it is also strange that the chronicles of the Moravian Hutterites record only the outward events, and do not discuss his faith.

Two Anabaptists died later as martyrs in Schärding: in 1529 Virgil Plattner, who had also been a priest, and in 1571 Wolf Binder.

As the heirs of his considerable estate Kaiser named his brothers and the schoolmaster Ulrich. The latter he admonished to continue to teach the boys; but if he could not stay there because of tyranny, then one of his relatives should take him and his boys to some place where "the Word of God is preached pure" (Roth, p. 27). Only four days after this execution Ferdinand I issued his first mandate against Zwinglians and Anabaptists for his Austrian hereditary lands, which threatened severe penalties for all who deviated from the Roman church on any point. Therefore schoolmaster Ulrich probably had occasion to leave the country with a relative and his charges.

A Dutch family tradition has it that the descendants of Leonhard Kaiser fled to Holland, and called themselves Keyser there.

Braght, Thieleman J. van. The Bloody Theatre or Martyrs' Mirror of the Defenseless Christians Who Baptized Only upon Confession of Faith and Who Suffered and Died for the Testimony of Jesus Their Saviour . . . to the Year A.D. 1660. Scottdale, PA: Herald Press, 1951: 420-422. Available online at: http://www.homecomers.org/mirror/index.htm.