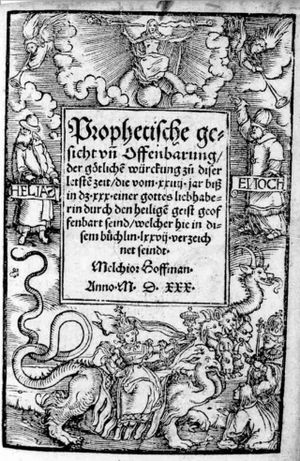 Ursula Jost (active c. 1524-1532, died between 1532 and 1539) was a Melchiorite prophet and visionary who lived in Strasbourg during the early years of the Reformation. Her husband, Lienhard Jost, was also a prophet and visionary. The two lived in the environs of Strasbourg in either Krutenau or Illkirch and had at least eight children, the eldest of whom was named Elisabeth. Ursula began experiencing visions in late 1524, by which point Lienhard's prophetic experiences had already begun and he had been briefly confined in an asylum as a result. She received her longest series of visions in 1525; the visions then ceased, with one exception, until 1529, and they continued with some regularity until at least 1532. The exact date of Ursula’s death is not known, but it was no later than 1539, by which point Lienhard had remarried a woman named Agnes.

Lienhard and Ursula Jost, along with Barbara Rebstock, formed part of a circle of prophets that coalesced around Melchior Hoffman after he arrived in Strasbourg in 1529. Hoffman relied on these prophets to legitimate his apostolic ministry, and he in turn bolstered their authority and promulgated their visions and prophecies within Melchiorite Anabaptist circles. Lienhard and Ursula were both illiterate and thus unable to produce written copies of their visions without assistance, and Hoffman provided this assistance on more than one occasion. He first produced an edition of Ursula’s visions in 1530, in which he identified her only as an anonymous gottesliebhaberin (lover of God). This edition, entitled Prophetische Gesicht unn Offenbarung der Götlichen Würckung zu diser Letsten Zeit (Prophetic Visions and Revelation of the Works of God in these End Times), was printed in Strasbourg by Balthasar Beck, who also served as a printer for Caspar Schwenckfeld and Sebastian Franck. It contained 77 of Ursula’s visions, arranged primarily in chronological order, as well as a foreword by Melchior Hoffman. Hoffman also produced a second edition of Ursula’s visions along with a copy of Lienhard’s visions, printed in Deventer in 1532 by Albert Paffraet (who later served as a printer for David Joris). This edition (until recently thought not to have survived, but recently rediscovered by Jonathan Green in the Austrian National Library in Vienna) also contained 29 new visions dated between 1530 and 1532. The Josts’ visions found a ready audience among Hoffman’s followers in the Netherlands, as Hoffman’s associate Cornelis Poldermann confirmed to the Strasbourg magistracy in 1533.

Ursula’s visions do not always follow a coherent theological agenda—-she frequently shared visions without being sure of their interpretation herself—-but several themes emerge, including the sovereignty of God, the wrath of God (particularly against wealthy ecclesiastical oppressors), and human participation in salvation (through response to God’s offer of salvation and through good works). Moreover, although the extent of Ursula’s religious education is unknown—-it was certainly limited by her illiteracy—-she nevertheless evinced a basic understanding of important Christian theological concepts (in particular the Trinity) and selected biblical imagery and references from Exodus to the Sermon on the Mount to Revelation. Her visions were influential in Melchiorite circles for the first few years after their publication, as Hoffman accorded them (as well as Lienhard’s prophecies) an authority equal to that of the Old Testament prophets. However, as Hoffman’s influence waned among the Dutch and North German Melchiorites after his 1533 imprisonment in Strasbourg (which lasted until his death in 1544), the influence of the Josts and the other Strasbourg prophets appears to have diminished as well, though they remained important figures in Melchiorite circles in Strasbourg itself until the Strasbourg Melchiorites returned to the Reformed church in 1539.

Ursula Jost’s visions began to garner renewed interest among scholars of Anabaptism in the latter part of the 20th century. Klaus Deppermann’s 1979 biography of Melchior Hoffman (translated into English in 1987) included a substantial section on Ursula, Lienhard, and the other Melchiorite prophets in Strasbourg. Deppermann took a negative view of the Josts’ influence on Hoffman and on the Dutch Melchiorites. In Deppermann’s depiction, Ursula emerged as an angry, even bloodthirsty, woman who stoked Hoffman’s apocalypticism and gave it a militant edge. Conversely, Lois Barrett’s 1992 doctoral dissertation situated Ursula within the broader Christian apocalyptic visionary tradition. She directly opposed Deppermann’s portrayal of Ursula and argued that Ursula’s work represented an example of an Anabaptist apocalyptic theology that was intimately connected with a pacifist Anabaptist ethic. Most recently, Christina Moss’ 2013 MA thesis argued that Ursula’s visions did not entirely fit either portrayal and that, while she certainly expected God to violently punish the wicked, her views on whether and to what extent the elect ought to participate in said punishment were unclear. Further work remains to be done on Ursula, her role within 16th century Anabaptism, and her legacy, particularly in light of the rediscovery of the Lienhard’s visions and the second edition of her visions. Certainly, Ursula’s writings provide a fascinating glimpse into the spiritual life of 16th century Anabaptist peasant woman.

Barrett, Lois. “Wreath of Glory: Ursula’s Prophetic Visions in the Context of Reformation and Revolt in Southwestern Germany, 1524-1530.” PhD diss.: The Union Institute, 1992.

Moss, Christina. “An Examination of the Visions of Ursula Jost in the Context of Early Anabaptism and Late Medieval Christianity.” MA Thesis: University of Waterloo, 2013.

Ursula, the wife of Lienhard Jost at Strasbourg, a "prophetess" and like her husband devoted follower of Melchior Hoffman, who was greatly influenced by her and ranked her prophecies with those of Isaiah and Jeremiah.