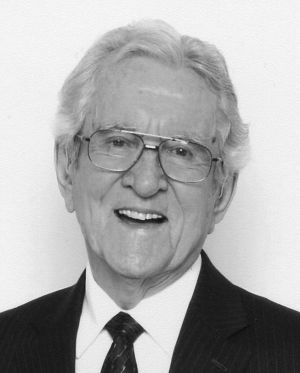 Helmut’s father, David K. Janzen, was an ordained minister and choir director in South Russia. The Janzen family fled the Soviet Union in 1926. Helmut was raised on a mixed-crop farm in Fortier, Manitoba. The Great Depression was in full swing, and his upbringing took place under impoverished conditions. Despite the backbreaking farm work, the Janzen family took time to read the Bible, pray, and then sing together in four-part harmony. Helmut attended a one-room school. When Helmut was thirteen years old, the Janzen family lived briefly in Niagara-on-the-Lake, Ontario.

In 1954 Helmut met Louise Regehr. Both were students at MBBC and participants in vocal outreach ministries. They married that year. In Winnipeg, Helmut directed the Elmwood Mennonite Brethren Church choir and served on the church council at a relatively young age. He also began his teaching career in Winnipeg.

Helmut moved with his family to Kansas in 1960 in order to continue his education at Tabor College. While here, Janzen served as choir director at Parkview Mennonite Brethren Church. In 1961 he was offered a job heading the music department at Mennonite Brethren Bible Institute (MBBI) in Clearbrook (now Abbotsford), British Columbia (BC). Despite a low salary, Janzen flourished in his new job, conducting student, church, and community choirs, touring with singing groups in British Columbia churches, leading choral festivals in the western provinces and Washington State, and teaching such talented vocalists as Edith Wiens, Ingrid Suderman, and Walter Janzen. He also earned a reputation as a persistent fundraiser. While doing all this, he managed to earn a masters degree in Music Education at Western Washington University.

Janzen left his career at MBBI in 1968 and moved to Victoria, British Columbia. Helmut taught public school, while directing the Saanich Oratorio Choir and, for six years, the Central Baptist Church choir. Janzen would later look back at his years at Central Baptist with fondness. In 1977 the Janzen family returned to Abbotsford, where Helmut resumed public school teaching, and directed the Central Heights Church choir.

In 1980 Janzen began a full-time pastoral ministry, beginning with Bakerview Mennonite Brethren Church in Abbotsford until 1986. He then pastored the Prince Rupert Mennonite Brethren Church, a congregation of great diversity in Prince Rupert, BC, from 1986 to 1991. Helmut and Louise had a reputation for generosity and compassion, interacting with and assisting the impoverished and addicted. In 1991 Helmut joined the pastoral staff at Central Heights Church during a period of congregational turbulence. He served on the pastoral staff at Yarrow Mennonite Brethren Church from 1993 to 1994 but retired in 1994 due to heart problems. In 1999 he became somewhat hearing-impaired.

In retirement, Janzen directed a seniors’ choir, the Jubilee Singers, and assisted, along with Louise, at the Northside Community Church in Mission, British Columbia. Louise contracted cancer and died in September 2005. Helmut then married Marjorie E. Funk in 2008, but she too contracted cancer, dying in 2009. In 2012 Helmut married Alice Warkentin, a widow who had worked with her husband, Art, under SIM in Nigeria.