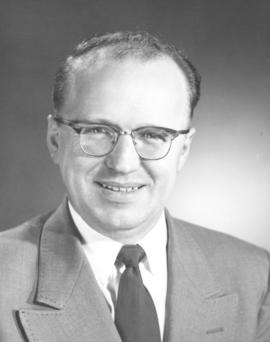 Leo's grandfather, Benjamin Janz, was the founder and pastor of the Main Centre Mennonite Brethren Church, and his father was a farmer.

Leo completed a three-year course at the Herbert Bible School in Herbert, Saskatchewan. During this time he, along with other Bible school students, traveled as an evangelist and singer. After graduation Leo taught Sunday school in his community and held weekly meetings in the school building. In order to expand his theological horizon, he studied for two years at Prairie Bible Institute in Three Hills, Alberta. During this time he married Lydia Doell, a friend of his youngest sister. The young couple settled in a small village near Swift Current, Saskatchewan and took over the management of a mission church of Western Children's Mission. 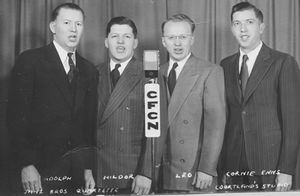 During a summer camp for children in 1946, Leo first appeared with his brothers Hildor and Adolph and Adolph's brother-in-law Cornie Enns as the Janz Quartet. The following year he attended Briercrest Bible Institute in Caronport, Saskatchewan. Here the Quartet sang every week for the radio program of the Institute, "The Young People's Hour." Subsequently, the four were appointed to the travelling evangelism team of Prairie Bible Institute. They produced a fifteen minute live radio broadcast entitled "Hymns That Live" as well as a popular weekly show for children that was broadcast by several Canadian broadcasters.

In 1951 the German branch of the mission organization, Youth for Christ, invited the Janz Quartet to minister as part of a nationwide crusade for three months. Upon their return, Leo decided to focus more on preaching, and he worked for a while together with Adolph Janz and Cornie Enns as teachers at Prairie Bible Institute, while Hildor Janz completed a vocal training in Los Angeles.

The positive experiences in Germany encouraged Leo together with Hildor, pianist Harding Braaten, and their families to emigrate to Europe in 1954. They settled in Basel and worked initially at the Pilgermission in St. Chrischona. Their first public event took place at the Basel Fair and lasted a whole month. In the following decades, the Janz Team conducted numerous evangelistic crusades, both in Europe as well as South America, including Brazil, Paraguay, and Argentina. The Janz Team also recorded broadcasts for Radio Luxembourg until 1980.

In 1989 Leo retired and returned to Canada, where he spent his last years in a nursing home. He died after a long illness four days before his 87th birthday.

Leo Janz is the father of Paul, Danny, and Ken Janz, co-founders of the Christian rock band Deliverance.