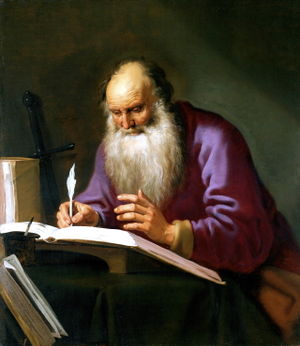 Lambert Jacobsz (Lambert Jacobszoon), born ca. 1598 in Amsterdam, died 27 June 1636 at Leeuwarden, a grandson on his moth­er's side of the noted Mennonite leader Lubbert Gerritsz, a son of the deacon Jacob Teunis, and a brother of Anthoni Jacobsz, was an elder of the Waterlander Mennonite congregation at Leeuwarden, Dutch province of Friesland. During his ministry there was some difficulty with the city government because of the building of a new meetinghouse in 1630-31, and Lambert Jacobsz was fined twice, apparently because he had preached in the new church, which was forbidden by the government.

In 1620 Lambert Jacobsz married Aeghtje Theunisdochter, a daughter of a Mennonite preacher and flax trader. Vondel wrote a poem for this occasion. In the fall of 1633, after the death of Aeghtje, he married Hillegont, daughter of Dirk Velius of Hoorn. He was a close friend of Dirk R. Camphuyzen. In 1636 Lambert Jacobsz died as a victim of the plague. A son of Lambert Jacobsz was Abraham van den Tempel, a well-known Dutch painter. The artists Govert Flinck and Jacob Adriaensz Backer were pupils of Lambert Jacobsz.

Lambert Jacobsz was not only a Mennonite minister but also carried on a business in paintings, being himself also a painter. About 1618 he had visited Italy. Until very recently Lambert Jacobsz was quite unknown as a painter. None of his paintings were discovered before 1918. Now there are 25 pictures known to have been made by him. The Mennonite congregation of Leeuwarden possesses three of them. In 1936 a memorial exhibition of his pictures was held in Leeuwarden and Amsterdam. Most of his pictures show an Italian land­scape, after a drawing he obviously made in 1618, and in this landscape a Biblical scene, such as Joseph sold by his brethren, Isaac and Rebecca, Ruth and Boaz, or the question of paying tribute (Matthew 22:16-21). His most impressive painting is that of the Apostle Paul.