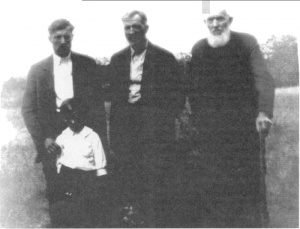 Abraham grew up in the village of Schönau, Molotschna Colony, Russia. Although Abraham was only 12 years old when his father died, he managed to complete his schooling before going to work for his uncle in Kleefeld and then for his cousin in Lindenau. When his cousin’s family moved to Grünfeld in the Borosenko Colony, Abraham also moved. He later worked for a family in Heuboden, near Grünfeld.  He felt humbled when the church leadership asked him to be the village school teacher after working as a simple farm hand. He taught school for four and a half years in Russia, working extremely diligently at this task. In Canada after 1874, Abraham P. Isaac always maintained an interest in education, even though he no longer served as a teacher. In 1879, he attended a teachers’ conference in the village of Chortitz on the East Reserve. He also had discussions with Henry H. Ewert (1855-1934) of Gretna, who served as a school inspector in southern Manitoba for several years.

After a number of difficult pioneering years of farming at Schönau, he became quite successful and eventually owned all of section 30-6-5E except for the northwest quarter. He is remembered for his determination and impressive improvements he made in his farming operation.

Abraham P. Isaac contributed an article to the 60 Jährige Gedenkfeier, the history book commemorating the 60th anniversary of the Mennonites in Manitoba in 1934. His writings were also quoted at length in the 75 Jährige Gedenkfeier by Gerhard F. Wiebe in 1959. His memoirs written in 1930 have also been published in a family history and in Delbert F. Plett’s Pioneers and Pilgrims (pp. 171-177).

Abraham P. Isaac was an adaptable, dedicated, largely self-taught person who worked hard to overcome his limitations and to use his skills however he could. Throughout the many changes in his life, he managed to find ways to adjust to his circumstances.