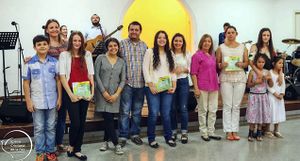 Baptismal class with their families, 2017
Photo from Memoria Viva

The initial efforts to start the Iglesia Cristiana de la Paz, which was originally called Iglesia Hermanos Menonitas del Barrio San Antonio, began in 1972. At that time several women from the San Antonio neighborhood of Asunción, Paraguay attended the “Iglesia de los Hermanos Menonitas del Barrio Dr. Francia,” known today as the Iglesia Príncipe de Paz or the “First Church of the Mennonite Brethren.” These women wanted to start a new church in their own neighborhood. The Alberto Schweitzer School was already operating in this neighborhood, so a new Mennonite Brethren church could also support the work carried out by the school. In 1970, Theodore Loewen, a teacher, regularly led meetings on Sundays in the school auditorium.

Some time later, the women from the Iglesia de los Hermanos Menonitas del Barrio Dr. Francia--with the support of the pastors of the congregation--invited Elfriede Verón, another teacher at the school, to visit the parents of the students with the goal of trying to start a new church. So, on 17 November 1974, they established the Mennonite Brethren Church of the San Antonio neighborhood, now known as Iglesia Cristiana de la Paz de los Hermanos Menonitas. The congregation, which met in the Alberto Schweitzer College auditorium, started with 13 members coming from the Dr. Francia neighborhood church. The group also used the classrooms of the school for Sunday school.

Juan Pankratz chaired the church council, and served as pastor. Teodoro Loewen, Silverio and Elfriede Verón, Miguel Macchi, Ramón Giménez, Salvador Riquelme, and Marlene Enns (who was a pianist for several years) were leaders and collaborators in the initial years. The church started many ministries including: Youth Ministry; Women’s Ministry; and Sunday School (which was the strongest ministry in the church). Sunday School was a focused ministry for families, including children, youth and adults.

In 2019, the “Iglesia Cristiana de la Paz” had a pastoral team up of Flavio Florentín (lead pastor), Rafael Zaracho (co-pastor), and David Irala (youth pastor). In addition, a support team (equipo de colaboradores), composed of leaders from the different ministries, supported the pastoral team. The ministries included: administration; ushers; youth; women; Sunday School; Oansa; praise; ICQ; and senior citizens. The pastoral team and church council serve as the church’s system of governance, which looks after the general welfare of the church along with the support team.